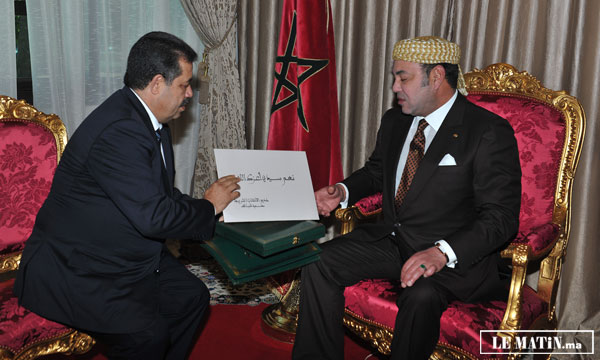 Morocco: will the King’s arbitration defuse the governmental crisis? 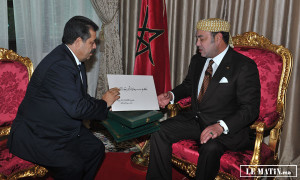 The Istiqlal Party on Wednesday handed over to King Mohammed VI a memorandum expounding the reasons behind the decision it made last May to withdraw from the coalition government led by the Islamist PJD (Party for Justice and Development).
The audience granted by the sovereign to the Istiqlal Party’s Secretary General Hamid Chabat is placed by many analysts in the context of the King’s arbitration role as it is stipulated by the Constitution and is viewed as evidence to the King’s keenness to ensure a proper functioning of the institutions, secure the country’s stability and preserve its supreme interests.
This same keenness had prompted King Mohammed VI to ask Chabat, when the IP announced its withdrawal decision last May, to maintain the Istiqlal party’s ministers in the government to manage daily affairs.
The IP is the second force at the House of Representatives with 60 members out of 395 and holds six ministerial portfolios in the current cabinet, including those of Economy and Finance, Education, and energy and mines.
The decision to withdraw from the government was made amid Chabat’s fierce criticism of the government ruling PJD and its leader and head of the government Abdelilah Benkirane.
Since he was elected Secretary General of the Istiqlal Party in September 2012, Chabat has often denigrated Benkirane for what he called “his inability” to lead the government, “his inefficiency” to address the country’s “serious economic and social problems,” and also for making “unilateral decisions without prior consultations with other components of the government coalition.”
Chabat told the media after the royal audience that the withdrawal decision was dictated by “objective reasons” and that his party is expecting a response from the sovereign very shortly.
For analysts, the royal intervention should not by any means be seen as a personal involvement in party disputes. Rather, it is meant to urge the conflicting parties to resort to dialog and consultation to try to find common grounds and defuse the tension in their relations.
For Chabat, the King’s arbitration is part of the country’s democratic process. The King, in his capacity as Head of State, shall, in accordance with Article 42 of the Constitution, see to the proper functioning of constitutional institutions, Chabat said. He pointed out that the fact that the government is a constitutional institution, “this is therefore a purely democratic process.”
Awaiting the king’s arbitration, no contingency is excluded. If the Istiqlal actually withdraws from the coalition government, the PJD, which did not win an overwhelming majority with the 107 seats it gleaned in the November 2011 elections, will have to seek alliances with other opposition parties. However, analysts rule out a possible alliance with the three parties that come right after the Istiqlal, namely the National Rally of Independents (RNI/52 seats), the Authenticity and Modernity Party (PAM/47 seats) and the Socialist Union of Popular Forces (USFP / 39 seats) in view of the tense relationship between the PJD and each of these parties.
Alliance is possible with the Constitutional Union (UC), but with its 23 seats, the coalition will not have the required 198 seat majority as it will only have 181 seats. So a new coalition with a comfortable majority seems quite complicated to form even if all the remaining nine parties represented at the Parliament join the coalition with their 16 seats.
Another possibility to overcome the governmental crisis lies in the organization of early elections. However this would not be the best solution, since the operation is rather costly and the financial crisis makes it difficult to embark on additional unexpected expenses.
Otherwise, if the PJD wants to preserve the current coalition, it will have to respond to the Istiqlal Party’s requests, mainly a cabinet reshuffle based on new criteria such as a reduction of ministerial portfolios and the dedication of 20 % of the portfolios to women, and a reorientation of the government’s priorities towards economic issues.
Awaiting the royal arbitration, all options remain on the table.

North Africa Post's news desk is composed of journalists and editors, who are constantly working to provide new and accurate stories to NAP readers.
NEWER POSTThe Rise of Ansar al-Sharia in Mauritania
OLDER POSTEmir of Qatar Hands Over Power to Son