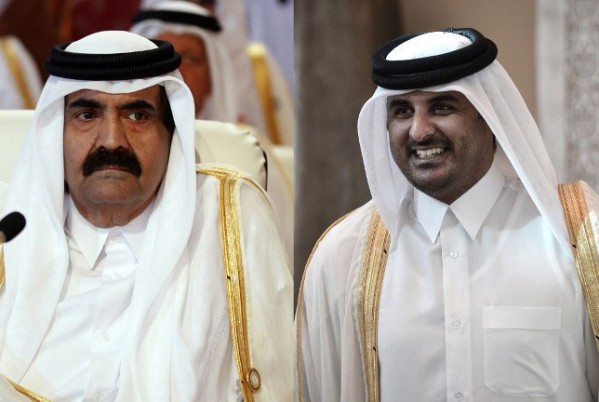 Emir of Qatar Hands Over Power to Son 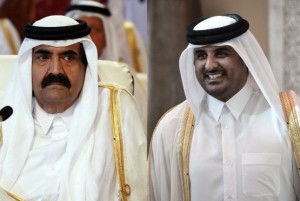 The emir of Qatar, Sheikh Hamad bin Khalifa al-Thani, has announced this Tuesday he was stepping down and naming his son, Sheikh Tamim bin Hamad al-Thani, 33, as his successor.
During the past weeks, there were some swirling rumors circulating in the media and diplomatic spheres that the 61-year-old emir was preparing to step down and transfer power to the crown prince due to his health condition. The emir is believed to be suffering from chronic health problems. He had had two kidney transplants, and has lost a lot of weight recently. Now the rumors of his departure were confirmed by Sheikh Hamad himself in a nationwide TV address.
“I declare that I will hand over the reins of power to Sheikh Tamim bin Hamad al-Thani and I am fully certain that he is up to the responsibility, deserving the confidence, capable of shouldering the responsibility and fulfilling the mission,” the outgoing emir said.
Sheikh Hamad, who deposed his own father in a bloodless coup staged in 1995, underwent a kidney transplant in 1997 and has been since then depending on dialysis.
The decision made by the ruler of the oil-rich Gulf nation to cede power voluntarily to the British educated crown prince is a rare and landmark event in a region where leadership changes are nearly always triggered by deaths or palace coups. Some analysts say the move may be seen as an attempt by the emir to polish his image.
The new emir is the second son of the second wife of Sheikh Hamad. He has been made the heir apparent after his eldest brother renounced his claim to the throne. The new Head of State of Qatar is expected to form a new cabinet in the few coming days, while the current powerful prime minister, Sheik Hamad bin Jassim al-Thani, who aggressively pushed Qatar onto every world stage possible, is expected to retire. He has been foreign minister since 1992 and prime minister as well since 2007.
According to some experts, the young Qatari ruler is not expected to make any immediate major policy shifts for Qatar, which has used its oil riches to become one of the world’s most politically ambitious countries.
Qatar’s wealth comes from its huge reserves of liquefied natural gas, the world’s third largest after Russia and Iran. The controversial Al-Jazeera satellite TV station, which was set up by Qatar in 1996 transforming broadcasting and news coverage in the Arab world, attests to Qatar’s soaring overseas influence.
The leadership change in this tiny Gulf emirate, which occurred at a critical time in the region rocked by the Arab Spring uprisings, will certainly send shockwaves across the entire Arab world.

North Africa Post's news desk is composed of journalists and editors, who are constantly working to provide new and accurate stories to NAP readers.
NEWER POSTMorocco: will the King’s arbitration defuse the governmental crisis?
OLDER POSTEgypt: The military no more a spectator