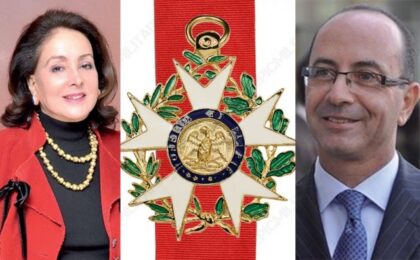 They were presented the distinction by French Ambassador to Morocco, Helene Le Gal, during a ceremony in Rabat this week.

The French Ambassador hailed during the ceremony Leila Benjelloun, president of the BMCE Bank Foundation, for her local and international commitment to education, environment, and culture.

“Thanks to your fierce desire to see the most vulnerable gain access to education, 29,000 students, in 20 years, have been educated in the Medersat network,” the ambassador said.

Leila Benjelloun, a physician and businesswoman, is president of the Alaouite Organization for the Protection of the Blind and the Moroccan Red Cross and vice president of the Association of Medical Doctors in Morocco.

She is also president of the Benjelloun-Mezian Foundation dedicated to the restoration of ancient monuments.

As co-chair of the BMCE Bank Foundation, along with her husband Othman Benjelloun, CEO of BMCE Bank of Africa, Leila Benjelloun has worked to promote education in disadvantaged areas, with a particular focus on improving literacy among women and girls.

In November last year, she was granted, along with her husband,
the “Visionary Award” bestowed by the Washington-based Middle East Institute to individuals or organizations in recognition for their outstanding work in the region.

While presenting the decoration to Noureddine Bensouda, the General Treasurer of Morocco, the French ambassador praised his major reforms in the treasury, including “modern structures necessary for anchoring the budget performance approach.”

The Legion of Honor was established by Napoleon Bonaparte in 1802 as the highest French order of merit for both military and civil achievements.

Membership in the Legion of Honor is technically restricted to French nationals; however, foreign nationals who have served France or the ideals it upholds may receive the honor.