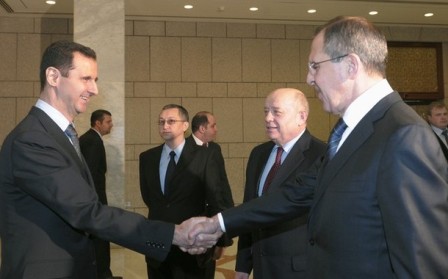 Can Diplomatic Efforts Save Syria from the Abyss? 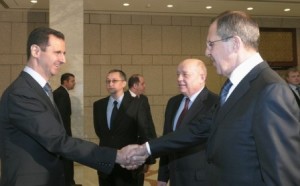 While Syria is tumbling deeper into the abyss with the participation of Lebanese Hezbollah in the fierce combats waged by the Syrian army to drive back the rebels and seize the strategic city of Qousseir, the international community seems time pressured to find a solution to this conflict in which over 94,000 persons have reportedly been killed since March 2011.
Diplomatic efforts are thus being stepped up to convene next June in Geneva an international conference in an attempt to end the deadly conflict in Syria.
The Geneva Conference project is initiated by Russia and the United States whose foreign ministers, Sergei Lavrov and John Kerry, are holding bilateral meetings and meetings with their peers from other countries to advance the project.
Syria’s foreign minister, Walid Moallem, has confirmed that his government would “in principle” attend this international peace conference, while the participation of the National Coalition of the Syrian opposition has yet to be confirmed as this coalition has suffered a serious setback in its efforts to unify opponents to the Syrian regime when it failed to agree on the expansion to new members.
Meanwhile, the European Union foreign ministers are meeting this Monday in Brussels to discuss the renewal for two years of a package of EU sanctions against the Syrian regime, which expires on May 31 at midnight.
France and the United Kingdom have called the EU to lift the arms embargo that is part of the sanctions against Syria so that weapons can be supplied to the rebels and thus increase military pressure on Damascus to make a political solution to the crisis more likely.
The argument does not seem however very convincing as several EU countries are still adamantly opposed to the arms embargo lifting, arguing that more weapons in the country would only increase the death toll.
As diplomatic moves are being made, the situation on the field is turning into a nightmare as put by the UN High Commissioner for Human Rights, Navi Pillay, during the opening Monday of the 23rd session of the UN Council of Human Rights.
A “humanitarian, social and political catastrophe already exists and what awaits us is truly a nightmare,” she said.
In the meantime, Iran, the Syrian regime regional ally, is endeavouring to assert itself as a key player in this civil war.
As part of these endeavors, Iran is readying to host on Wednesday its own “international conference” to find, as announced by the Iranian Foreign Ministry, a “political solution” to the Syrian conflict,
According to the Iranian Foreign Ministry, more than 40 countries are expected at the conference to be held under the topic of “political solution and regional stability.”
The aim of the Tehran conference is to “prepare the ground to end violence and help organize elections under international supervision,” a Foreign Ministry official said, insisting on the need to let the Syrians decide the future of their country.
Tehran had already hosted a meeting on “national dialogue in Syria” in November 2012 that brought together some 200 representatives of the Syrian government and of different Syrian political, religious or ethnic groups.
However, as this dialogue did not seem to have been of any help in defusing the tension as shown by the ensuing developments, some analysts are wondering on the real purpose of the Wednesday meeting and whether it is not a mere response to some countries, mainly France, which refuse the participation of Iran in the planned Geneva conference.
Actually France and some other states have expressed opposition to Iran’s participation in the planned Geneva conference, unlike Moscow, another ally of the Syrian regime, which insists on the importance of Iran’s presence, arguing that Tehran can play a key role in finding a political solution to the Syrian crisis.
Whatever the organizers of these events, whatever their purposes, what is crucial now is to find a way out to the conflict, to end the plight of the Syrians, either those who remained in their country and who are daily bomb- shelled or those who fled the bombings and took refuge in neighboring countries, and to bring out Syria from the abyss.