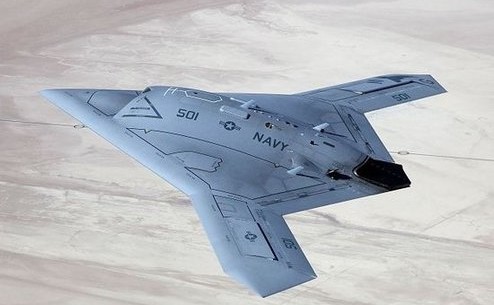 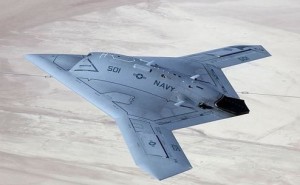 The US navy has launched on Tuesday for the first time the X-47B drone from the USS George H.W. Bush nuclear-powered aircraft carrier.
The first 65-minute test flight of the remotely piloted combat aircraft, from the carrier at sea to the Navy’s “Pax River” test site ashore, has enabled to validate among others the flight control software.
The Northrop Grumman-made autonomous combat drone having the size of a fighter jet will be able eventually to conduct surveillance missions, shoot targets, and stay in the airspace over very long periods of time.
Human intervention will be limited to sending and receiving information.  Ground operators, who will be constantly in contact with the drone, can thus redefine its missions or redirect its course.
The US Navy does not hide their pride exhibiting this new toy which has a 50 hour flight autonomy and can refuel in flight, boasting thus a record autonomy. The drone can fly at a 12km altitude, has an operating range of 1300 miles and its automate pilot, unlike humans, does not complain of exhaustion or hunger.
Besides, the drone which can fly around the clock whatever the conditions would eventually enable the US to launch unmanned aircraft from almost anywhere in the world. Also, in addition to its primary observation missions, the drone can be entrusted with bomb dropping as it has a payload capacity of 2 tons.
The X-47B drone can also carry out landing operations on aircraft carriers, an extremely delicate task even for experienced pilots.
Defense analysts explain that if the Navy brass cares that much about the newborn it is because they believe that unmanned crafts are the future of warfare and that two rivals, namely China and Iran, are busy building sophisticated radars and advanced anti-aircraft missiles.
Moreover, as the drone is designed to take off and land on a carrier, the US military would not need to resort to other countries’ bases, which is usually tied to hard-to-get authorizations.
Besides the X-47B, the Navy plans to start developing this year an actual combat-ready drone, the UCLASS (Unmanned Carrier-Launched Airborne Surveillance and Strike System). But to go on with the plans, it needs to have the necessary funding approved by the Congress.
This may not be easy task as the Congress has still in mind the uproar raised after the US used Predators and Reapers to collect intelligence and carry out lethal missile attacks in Iraq, Afghanistan, Pakistan and Yemen.
Some analysts explain that the Navy’s move to expound all the advantages and capabilities of the drones is primarily meant at the Congress in an attempt to make it approve the necessary money and thus help the country win the unmanned aircraft war with China and Iran.
Both rival countries are actually said to be developing sophisticated warfare (radars, anti-aircraft missiles, shore-based anti-ship cruise missiles, ballistic missiles) all meant to keep US aircraft carriers at bay, at a time US missiles can hardly cover about a third of Iran and cannot reach China’s shore.
So, if the UCLASS funding is approved and the project materializes, the Navy will upgrade its capability for long-range strike to unprecedented levels, the project defenders argue.

North Africa Post's news desk is composed of journalists and editors, who are constantly working to provide new and accurate stories to NAP readers.
NEWER POSTMajor tax reform plan begins in Tunisia
OLDER POSTSamsung factory to supply ME and Africa from Egypt