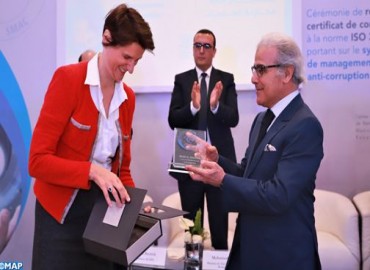 The bank has received this certification on its 60th anniversary following the audit conducted by Euro-Compliance in October 2019, Bank Al-Maghrib said in a press release.

This certification will further strengthen Bank Al-Maghrib’s actions, in terms of ethics and professional conduct, providing the Bank with an integrated and well-structured anti-corruption system, the release added.

Speaking at the awarding ceremony, held on Thursday in Rabat, Central Bank governor Abdellatif Jouahri said the bank has a “zero tolerance” policy for corruption and has set up a specific mapping of corruption risks.

Last Month, Jouahri was named among the top ten central bank governors in the world for the third year in a row.

Jouahri got an A, the maximum grade awarded by New York Magazine Global Finance in its Central Vanker Report Cards 2019.