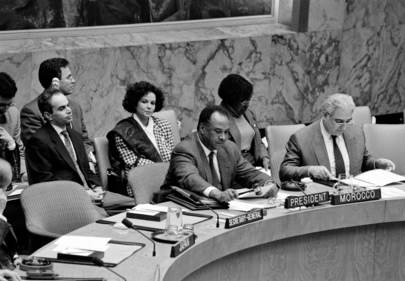 Did the U.S. (almost) change its policy towards Western Sahara?

The United States has for years voiced support to the settlement of the Western Sahara in the context of the United Nations and when in 2007 Morocco proposed a plan providing to grant a large autonomy to the disputed territory, Washington has expressed in unequivocal terms backing to the Plan and subsequently to the Moroccan official position.

Obama’s Democrat Administration, echoing the previous Republican Administration, described the Morocco-proposed Autonomy Plan for the Sahara as “serious, realistic and credible.”
That was Washington’s position on this long simmering territorial dispute.
Surprisingly, few days ago, the United States has reportedly reassessed its position and was readying to submit to the Security Council a draft resolution calling for establishing a human rights monitoring mechanism within the MINURSO, the United Nations Mission for the Referendum in Western Sahara, primarily entrusted with supervising since 1991 a UN-brokered cease-fire between Morocco and the Algeria-backed Polisario separatist movement.
Originally, the MINURSO deployment in Morocco’s newly recovered Sahara in 1991 translated “on the ground” the resolve of the Kingdom, a legitimacy-loving country, to associate the United Nations to the settlement of the conflict, although the move was subject to criticism on the part of many members of that very World Body.

The proposed amendment would have granted the MINURSO the right to monitor human rights in Western Sahara and in the Sahrawi refugee camps in Tindouf.
However, after the consultations held over the past few days between the “Friends of Western Sahara” group and the reservations expressed by Morocco, Washington has finally aligned itself on the consensus approach advocated by the group members, including besides the U.S., Britain, France, Spain, and Russia, in a bid to reach a negotiated and mutually acceptable solution to the long-lasting issue.
A shift in the United States’ policy on Western Sahara would have been incomprehensible and contrary to the logic calling rather for more efforts to find a negotiated political solution to the conflict which puts at stake the stability of the region and at the same time threatens American national interests.

The Obama Administration is surely fully aware that its position on Western Sahara can either harm or protect America’s few vital allies left in the region and that a negotiated settlement of this regional conflict is vital to the security and stability of the whole region.
Also, a negotiated political solution to the conflict is all the more necessary in view of the political and military developments shaking the MENA region and in view of the terrorist threat looming on the Sahel, the Maghreb, the whole African continent, and the rest of the world, including the United States, to whom we are expressing our sympathy and compassion at a time the American People is once again mourning innocent victims of violence and extremism.
When Morocco devised the autonomy plan for Western Sahara in 2007, it was not only seeking to settle a longstanding conflict that was very costly to Moroccan-Algerian relations in particular and to the construction of the Maghreb in general, but more importantly to establish peace and security across North Africa and shield the region from Islamic extremism.
The message underlying the Moroccan proposal was clearly understood by the International community which applauded the move. World powers, including the United States, and the Security Council underlined that the scheme can be a platform for earnest negotiations to end this long simmering conflict.

The support to the Morocco-proposed plan gained in momentum after Western intelligence services and international security pundits warned of the growing ambitions of Al Qaeda of the Islamic Maghreb (AQIM), previously known as the Algerian Salafist Group for Preaching and Combat, which clearly announced plans to attack European, Spanish, French, and American targets.
Intelligence services and pundits also warned that the Tindouf refugee camps constitute a fertile breeding ground for extremism and a recruitment center for Al Qaeda-affiliated groups roaming in the region. The Malian crisis is but an instance of what extremists and terrorists can do when the central power is weakened and the army disorganized, and is an additional evidence, if need be, that a weak country can easily leap into a terrorist-controlled state.
Any shift in U.S. policy that is likely to invigorate independence-seeking groups and extremists will, whatever its reasons, entail more insecurity, more instability and will be perceived by radicals as an encouragement to their claims.
Morocco stands ready to fight the scourge of terrorism and extremism and to join efforts in this combat with its friends and allies, including the United States of America.

Amid all these developments, one needs to remind that Morocco, a moderate Islamic country and a stable island in a troubled sea, stands ready to fight the scourge of terrorism and extremism and to join efforts in this combat with its friends and allies, including the United States of America.
Morocco and the USA, united by their dedication to the same principles, the same values, have actually crafted across the two shores of the Atlantic a shared History. A shared History whose first lines were drawn when the North African Country was the first state to hail and recognize, without any mercantile motive, the birth of the American Nation, more than three centuries ago.
Morocco, under the leadership of H.M. Sidi Mohammed Ben Abdallah, opened its ports to the ships and trade of the nascent America and allowed its diplomacy to open its first consulate abroad in Tangiers, in premises offered as a welcoming gift by King Mohammed III himself.

Through the selfless recognition of the American Nation, the Kingdom of Morocco welcomed, in an intuitive and inspired approach, the emergence of a great state bound for a great destiny.
Moroccan-American friendship thrived over centuries, helped in that by joint actions at the service of people’s freedom, as evidenced by their cooperation during World War II when Moroccan riflemen and Goumiers ran to support thousands of “boys” stuck in the mud of the Italian front and when Morocco offered its strategic space to U.S. forces for the construction of bases that will be used to close down the gates of the western Mediterranean to the Nazis.
Morocco and the United States of America will undoubtedly endeavour to preserve the legacy bequeathed by the “Founding Fathers” of the American Nation and the Alawite Sovereigns who initiated this enduring friendship.

For all these reasons, I think that the United States must continue its forthright support to its strategic ally that it has repeatedly praised as “a leader and a model” in the MENA region and must likewise continue its endeavors to expand this close and long-standing relationship.
Moreover, it seems to me more urgent and more crucial than ever to push the parties to the Western Sahara conflict to settle this issue that is depriving thousands of refugees from their rights to free movement, family reunion and peaceful existence and that is hampering the construction of the Maghreb.