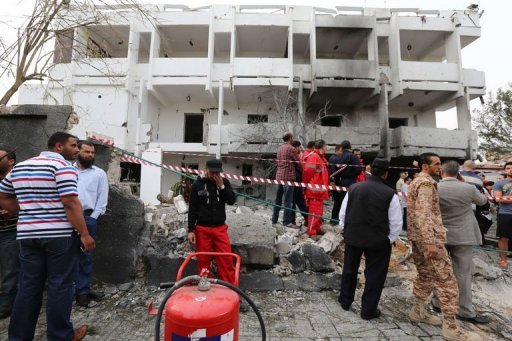 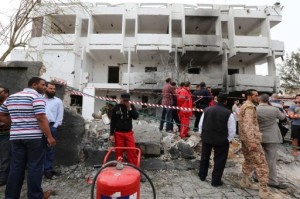 The terrorist bombing that hit lately French embassy in Tripoli has tested the Libyan security apparatus and showed its vulnerability as the North African country is experiencing a turbulent and shaky transition after years of autocratic rule under Gadhafi regime.
The attack comes as the new Libyan government is battling to disarm the militias which continue to operate across the country, undermining the ongoing efforts to rebuild a democratic state, respecting human rights and the rule of law.
The Libyan authorities are also challenged by the Islamist extremists suspected to be behind the car bombing that targeted the French embassy compound. The blast wounded two French guards and caused extensive material damage.
It is the 1st major and most serious assault on a diplomatic mission in the North African nation since the U.S. ambassador was killed last year in a similar attack in Benghazi.
French President Francois Hollande described the bombing as an assault on all countries engaged in the fight against terrorism. “France expects the Libyan authorities to shed the fullest light on this unacceptable act, so that the perpetrators are identified and brought to justice,” Mr.Hollande said.
For his part, French top diplomat, Laurent Fabius called it “an odious act intended to kill”, but “France will not bend”, he stressed, noting that his country has beefed up security throughout the Mideast and the Sahel region wherein French troops are battling Islamist jihadists.
Washington also condemned the blast, saying it is “a direct attack on all Libyans who fought for democracy, security and prosperity.”
The UN Secretary-General, the Security Council and several governments around the world have all condemned the bombing and called on the Libyan authorities to track down and punish those responsible for the embassy attack.
Several political analysts and Western diplomats have expressed concerns over the possibility of greater instability in Libya, where they believe some rebel fighters from Mali fled following Paris’ military intervention.
The French embassy attack took place few weeks after a UN panel has warned that against the threat posed of the growing “illicit flows of weapons from Libya to wide range of non-state actors, including terrorist groups”.
“Libya has over the past two years become a significant and attractive source of weaponry in the region,” since the fall of 41-year Libyan dictator Muammar Gadhafi in 2011,” the report said. “The lack of an effective security system remains one of the primary obstacles to securing military materiel and controlling the borders.”
The panel also warned that armed terrorist groups in Libya, who it said are the best financed, are strengthening their position. “The lack of political and security stability, the continuing absence of control over stockpiles by the national authorities and delays in disarmament and weapons collections encourage illicit trading and have generated considerable money-making opportunities for traffickers,” the report stressed.
The 94-page report, sent to the U.N. Security Council, was elaborated by a five-member expert panel after visiting 15 countries in Africa, Europe and the Middle East including 10 visits to Libya.
The document details arms trafficking cases and countries that violated the UN embargo imposed after the 2011 popular uprising and civil war that ousted Gadhafi regime.

North Africa Post's news desk is composed of journalists and editors, who are constantly working to provide new and accurate stories to NAP readers.
NEWER POSTDid the U.S. (almost) change its policy towards Western Sahara?
OLDER POSTWhat growth for Egypt?