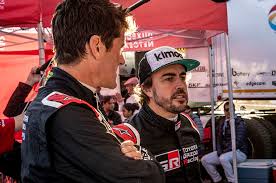 Former Spanish Formula 1 legend Fernando Alonso will take part in the Rally Morocco, next month, as a rehearsal for his participation in Rally Dakar next year in Saudi Arabia, his team Toyota Gazoo Racing has announced.

The rally is slated for October 3-5 and is viewed as the traditional warm-up event for the Dakar in January.

Alonso, 38, retired from Formula 1 last season after winning world championship in 2005 and 2006. The Spaniard said he left the Formula 1 to try out other challenges and for that, he has already clinched victories at Le Mans 24 Hours and World Endurance Championship.

It is unclear who will be Alonso’s co-driver but Autosport.com believes that Frenchman Jean-Paul Cottret, who has won the Dakar seven times will sit next to Alonso in the Toyota’s Hilux car.

The Rally Dakar raid will make its debut in Saudi Arabia from January next year.