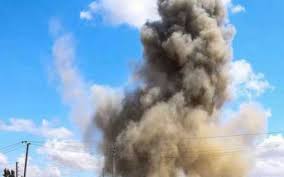 Khalifa Haftar, the Libyan military commander, has pounded positions of ally forces of the UN-backed Government of National Accord (GNA) in the city of Sirte formerly controlled by the Islamic state group, ISIS.

Meanwhile, a military source from Haftar’s Libyan National Army (LNA) told Sputnik Monday that at least 32 people were killed and over 50 were severely injured in the airstrikes on Sirte.

The Sirte Protection Forces, SPF, believe some of the airstrikes were conducted by foreign drones.

The SPF condemned the raids noting that they hindered its efforts in fighting ISIS and its sleeper cells as well as Gaddafi loyalists willing to create chaos in the coastal city.

The SPF also laid into the alleged involvement of foreign drones in the raids as it called on “all Libyans and international community to condemn the foreign strikes on its forces”, Libya Express notes.

Likewise, the High Council of State (HCS) has expressed deep concern over the airstrikes targeting the Libyan Army forces, assigned to protect and secure the city of Sirte.

“These foreign-operated airstrikes on Libyan territory, in support of the criminal gangs led by war criminal Haftar, demonstrate his intention to expand the circle of conflict and wars in Libya,” the HCS stated.

It added that the targeting of the SPF, which serves as an effective barrier against the threat of ISIS, shows the desire of these gangs, and the countries behind them, to bring back terrorism to Sirte and the whole region.”

Sirte, home to former leader Muammar Gaddafi, became from 2014 ISIS’s stronghold in Africa. The GNA forces backed by US air forces regained the city in 2016.

The latest incidents complicate further the Libyan crisis and UN efforts to unite both parties.

Libya, divided since the fall of Gaddafi in 2011, has been further cracked early this year after Haftar launched a surprise campaign to capture Tripoli in an effort, he claimed, to drive out terrorists and armed gangs.