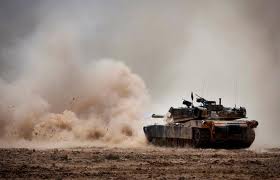 The United States and Morocco are to hold later this month a joint multi-lateral exercise dubbed “Exercise African Lion-13” that will involve more than 1,400 U.S. service members and approximately 900 members of the Moroccan Royal Armed Forces, announced the US Africa Command (Africom).
The two countries’ servicemen will conduct military-to-military engagements in various exercises that build military partner-nation capacity. According to an Africom official, the exercise is a replication of what would be done during a real-world contingency.
For the first time, members of the Federal Republic of Germany Armed Forces and members of 12 additional European and African countries will observe the exercise, Africom said.
During AL-13, the combined task force will conduct familiarization and training to include: command post exercise, live-fire and maneuvering, peace keeping operations, intelligence capacity building seminar, humanitarian and civic assistance, amphibious operations, aerial refuelling and low-level flight training.
Part of the exercise, the U.S. Navy Ship Dahl, a cargo transport, anchored in the southern Moroccan port of Agadir to deliver more than 250 short tons of equipment for the exercise. A joint force of Marines, Airmen, Sailors, and Soldiers conducted a maritime pre-positioning offload at the port and delivered, organized, and prepared vehicles and equipment for the joint multi-lateral exercise.
“We are going through the entire maritime prepositioning process, from planning all the way through to the offload, employment to implementation, and then to retrograde, reconstitution and back-loading the ship,” said Lt. Col. Peter J. Mahoney, the officer-in-charge of the Arrival-and-Assembly Operation Group, AL-13.
“This is a true Maritime Prepositioning of Force ‘drill’ where all the equipment from the offload will actually be used during the exercise,” Mahoney said.
Joint Task Force- Port Opening (JTF-PO) is a joint-force service element commanded by U.S. Transportation Command with the capability to rapidly establish and initially operate a port of debarkation and distribution, facilitating ship-to-shore support for regional combatant commanders.
The current offload of JTF-PO represents a Maritime Prepositioning of Force where all task force elements are participating at the same time.
The offload will continue throughout the week, delivering 7-ton trucks, armored Humvees, Howitzers, and other logistical items such as Meals Ready to Eat (MREs) for the exercise.
CATEGORIES AmericasFeaturesHeadlinesInternationalMorocco
Share This