In Tunisia: Here They Go Again On Their Own

The January 14 ouster of Ben Ali’s regime in Tunisia set off a wave of popular uprisings in the Middle East, the most significant change in more than thirty years. The last time the Middle East saw such monumental shifts was in 1979, when the ouster of the Shah in Iran, the Soviet invasion of Afghanistan and the occupation of the holy sites in Saudi Arabia all practically produced the Middle East in the ‘form and shape’ that the West had to face until the Arab Spring commenced in earnest. 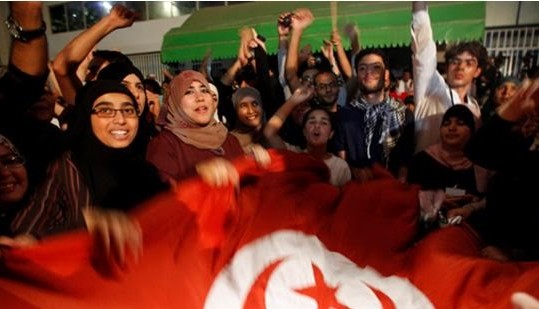 It was a Middle East that was caught in an authoritarian stasis and that resisted the waves of modernisation and democratisation of the 1990s. Yet, 1979 holds an important lesson: the Iranian revolution did not begin as an Islamic one. But, with the return of Ruhollah Khomeini, it was quickly captured by an increasingly powerful Islamist movement. It is the history of the Iranian revolution that makes many wary of similar developments following the Arab Spring.

Which is why it is hardly surprising that more than two years after the regime of Ben Ali was ousted, more and more observers take to increasingly pessimistic tones. The assassination of secular activist Chokri Belaid in early February has fuelled such concerns. Though it is unclear who bears ultimate responsibility for the murder, most point to rather unveiled threats by the League for the Protection of the Revolution (LPR), which is a paramilitary organisation many consider the armed wing of the ruling Islamist party En-Nahda. Against that background, the assassination appears to have been a politically motivated strike against the opposition, a move to consolidate En-Nahda’s control over the country. And the assassination came alongside growing reports of secret detentions and more widespread torture.

If it was a move designed to silence the opposition, it has backfired rather dramatically. Faced with a public outcry over the murder, the government had to step down, even though En-Nahda is going to remain at the helm of the country at least until elections later this year. The newly created caretaker government is being led by Ali Larayedh Enade, a member of En-Nahda, and his two coalition partners – the Congress for the Republic and Ettakatol – are both secular parties. Yet, while it is still unclear where the country is headed, En-Nahda decided to move the portfolios for justice, home, defence and foreign affairs to experts without party-affiliation – these moves are designed to counter allegations that it was trying to dominate central government institutions.

Meanwhile, education remains in the hands of Salem Labiadh, who is considered a staunch Islamist and strongly opposes any Westernisation of Tunisia. In the long run, education is key in guaranteeing a pluralistic and open society. So, it should be worrisome that this critical department is being run by a staunch Islamist. But there is also reason to be hopeful. The latest demonstrations starting in early March quickly turned into an anti-government protest. Originally supposed to support women’s rights, they evolved into an impressive demonstration for liberal rights and a secular government; rights Tunisians at least partially enjoyed even under Ben Ali. It does appear that Tunisians are rather set on safeguarding their revolution from being hijacked by Islamists. After all, not every revolution has to go down the Iranian path of 1979.

What does all of this hold for the West? The Europeans are preoccupied with the financial crisis and have yet to develop any meaningful initiative. It again falls to the United States to show global leadership and the real challenge to the United States is of a rather stark political nature. Faced with the Arab Spring, Washington quickly reinforced its long-time aspiration of promoting democracy and hence lending their support to the movements that support democratic transition. Yet, at the same time, the Obama administration appears to be rather eager to abandon the Bush doctrine and move towards a more realist foreign policy. The ongoing upheaval clearly demonstrates that this might well be a circle a bit difficult to square.

North Africa Post's news desk is composed of journalists and editors, who are constantly working to provide new and accurate stories to NAP readers.
NEWER POSTAlgeria: strategy for Tourism development
OLDER POSTPoverty, Inequality and Safety Nets in the MENA Region