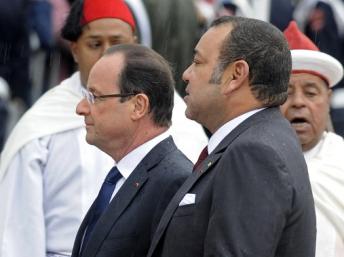 President François Hollande of France is paying as of Wednesday a two-day state visit to Morocco, his first since his election in May last year.
The aims of this visit are both political and economic, Morocco being France’s major partner in the Maghreb and France being Morocco’s closest friend in Europe.
“The relationship between the two countries is very dense and smooth,” and Morocco is “an intimate, very close partner.” This is how the Elysée has described French-Moroccan relations on the eve of the presidential visit, whose purpose is to provide further means to preserve this high level relationship.
As a token of the deepness of relations between the two countries, King Mohammed VI was the first head of state to be received by François Hollande at the Elysée, on May 24, 2012, just a week after his swearing in ceremony.
Even when the French President paid his first official visit outside Europe to neighboring Algeria, derogating thus from the tradition set by his predecessors who all used to visit in their first trips abroad Morocco, diplomats explained the move by the socialist president’s desire to mend his country’s strained relations with Algiers and at the same time play a useful part in Moroccan-Algerian rapprochement.
As put by a member of the president’s entourage, Holland’s state visit to Morocco provides  an opportunity to reaffirm that bilateral relations are faring well at all levels and to renew resolve to preserve this high level relationship as it continues to develop today in the coming years and coming decades.
At the political level, talks between the two heads of state will cover a large array of issues on which the two countries have converging standpoints, starting with struggle against terrorism and the proliferation of al-Qaeda affiliated groups in the Sahara-Sahel region where France took the lead when it intervened in Mali to dislodge the extremists and separatists.
President Holland will undoubtedly hail Morocco and its king for their stand on Mali and their support to the French intervention.
The political agenda talks will also cover Syria, the Palestinian issue and the Middle East peace process in addition to the situation in the Maghreb and in the Arab world at large in the aftermath of the Arab Spring Revolutions. France has anyway repeatedly hailed the way Morocco and its leadership have embarked on a reform process long before the first sparks of the Arab Spring.
The French president will have the opportunity to expound his country’s stands on all these issues and on Morocco’s reforms when he addresses on Thursday the two chambers of the Moroccan parliament, convening an extraordinary session on the occasion.
Economic partnership will also figure high on the talks agenda, France being more eager than ever to maintain its rank as Morocco’s first partner in the region, especially after Spain narrowly overtook France in 2012 as a leading exporter to the North African Country.
The President and his large accompanying delegation, including some 9 cabinet members, scores of heads of enterprises and economic operators, seem more determined than ever to “re-invent” French-Moroccan partnership that has always been a win-win partnership and to strengthen the pillars of the two countries’ economic cooperation, being aware that the North African Kingdom is the partner for the future on the economic scale.
Around 750 French companies are operating in Morocco, employing between 80 and 100 000 people.
“We are Morocco’s largest trading partner, largest investor, and we will spare no effort to maintain our rank,” insists a source close to the French Presidency.
The French President’s visit is thus reaffirming that the exceptional and outstanding relations between Morocco and France are steadfast at the  political, economic and cultural scales and that the two countries are both resolved to upgrade their win-win partnership.