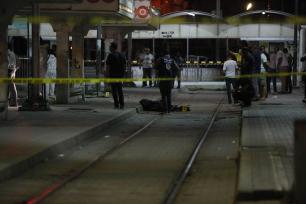 Tunisia: Wanted terrorist blows himself up after being surrounded by security forces

A Tunisian citizen, placed on terror list by authorities, blew himself up Tuesday in capital Tunis when security forces surrounded him.

The alleged terrorist according to the interior ministry detonated his explosive belt after being shot by security forces, in the Intilaka area of Tunis.

Terrorist Aymen Smiri, killed on Tuesday evening, had been carefully tracked down by the security forces under the National Investigation Unit for Terrorism and Organized Crime, said Wednesday spokesman for the Interior Ministry Sofiene Zaag.

“Following a long chase, special forces surrounded the terrorist. When forces began shooting, he blew himself up with an explosive belt he was wearing,” the spokesman said.

The blow made no causalities, he said.

Authorities on Monday announced the hunting of Aymen Smiri they described as “terrorist”.

The Tuesday incident is the third in less than one week in the Tunisian capital. Last Thursday two bombers blew themselves up killing one police officer and wounding several other people in what appeared as a resurrection of terror attacks in the North African country.

Tunisia has been under state of emergency since November 2015 following three terror attacks in Tunis and Sousse, in which at least 70 people, mostly foreign tourists, were killed.

Foreign holidaymakers have resumed visiting in numbers the country after shunning it following the 2015 cascade of deadly attacks.