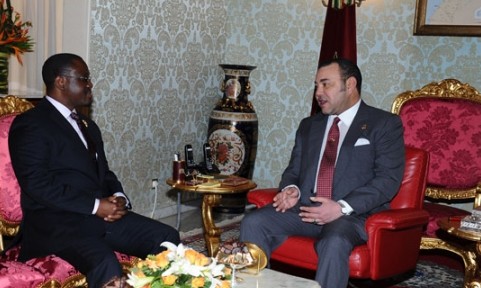 In a gloomy economic environment, Morocco turned its eyes from Europe and opened its hand towards the South, wanting to free itself from the shackles and chains locked by trade agreements with a self-centered Europe. According to African countries, the EU uses its quotas and standards as leverage against them.

The recent African tour led by the King Mohammed VI –knowing that the king rarely moves- in Senegal, Ivory Coast, and Gabon tells a little more about Morocco’s strategic positioning in a continent aggressively penetrated by the kingdom these last years.

Indeed, besides the political, social, religious and security aspects with the Sahel-Saharan crisis, Mohammed VI should heavily emphasize during this mediatized trip on the motto he has been hammering for ten years: south-south cooperation.

Behind this diplomatic slogan hides the very essence of the kingdom’s foreign policy doctrine towards Africa: a mixed approach composed of aid to development and systematic establishment of its companies in strategic sectors: banking, insurance, finance, construction, telecommunications, goods and services.

In short: the diplomacy at the service of the economy and vice-versa

It must be said that the country’s geo-economic nature was inclined to such disposition. With a growth forbidden to the East due to closed borders with Algeria, Morocco could not plan its economic development in the eastern flank. Forced to lead a diplomatic battle on the Western Sahara issue with Algeria, Morocco had no other choice but to conquer Africa, especially when Europe, as its traditional partner, saw substantial growth decline.

For a country with no natural resources or oil –unlike its Algerian counterpart- the economic situation of “Mohammed VI the African” is impressive.  Three major Moroccan banks: Attijariwafabank, BMCE and Banque Centrale Populaire bought banks in the south that guaranteed them a presence in nearly thirty countries. Meanwhile, Maroc Telecom holds five mobile phone licenses and counting in the continent. Major groups like Managem, Ynna Holding and CCGT are involved in various sectors such as mining, tourism, and housing. The Moroccan National Water and Electricity Company (ONEE) and the Moroccan airline (RAM) have also a strong presence on the African continent. RAM has more than 30 airlines and opened offices in 11 countries.

The advent of Mohammed VI reign in 1999 open the path to Morocco’s new ambitions in Africa, when it decides to cancel the debts of the Least Developed Countries (LDC) of sub-Saharan Africa, in the name of south-south cooperation, and exempt their products from tax and duty at the customs. The assistance provided by Morocco to sub-Saharan Africa amounts between 180 and 260 million euros per year, mainly to West and Central African countries. In this respect, Morocco is among the first investors in Africa according to the United Nations Conference on Trade and Development (UNCTAD) ranking.

Beyond this display of solidarity and the Qatari “wallet diplomacy”, which Morocco cannot compete against, Mohammed VI wants to position his country as a strategic hub that concentrate air traffic –via Casablanca- and the whole financial services of West Africa throughout Casablanca’s Finance City.

The latter is expected to wear the high-level Moroccan strategy on the African continent, which aims to make the country a continental economic superpower able to cross swords with another opponent South Africa. Plagued by its own demons, it is undergoing a downturn that Morocco wants to exploit to its advantage by strengthening its position on the continent. That is the sole purpose of Mohammed VI tour that should, beyond official inaugurations and bilateral agreements, improve the evolution of the “Cherifien Business” in Africa.