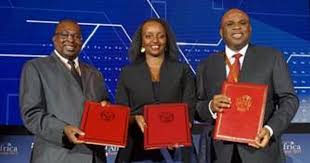 The second Intra-African Trade Fair (IATF 2020) scheduled to take place in Kigali, Rwanda in September 2020 will target the execution of Intra-African trade deals worth more than $40 billion, President of the African Export-Import Bank (Afreximbank), Prof. Benedict Oramah announced on Wednesday.

The event, co-organized by Afreximbank and the African Union (AU), which is in its second edition is expected to attract more than 1,000 exhibitors and more than 10,000 potential buyers from more than 50 African countries.

Prof. Oramah was speaking in Kigali at the signing of the hosting agreement for IATF 2020 by the Government of Rwanda, Afreximbank and the African Union.

The implementation of the African Continental Free Trade Area (AfCFTA) scheduled for May 30 should foster new opportunities for trade agreements during IATF 2020.

AfCFTA comes with big ambitions: if fully implemented, it will create a single African market for goods and services, covering 1.2 billion people and a GDP of $2.5tn across 55 member states of the African Union.

According to the African Union, the agreement has the potential to boost intra-African trade by 53% by eliminating import duties, and to double trade on the continent if non-tariff barriers are also lowered.

The very first edition of the fair was held in 2018 in Cairo, Egypt. At the time, it had generated more than $30 billion in investment.