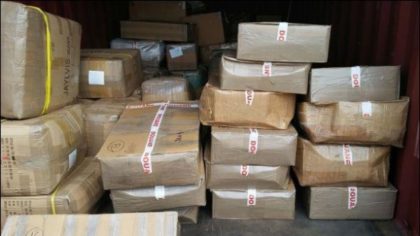 French judicial authorities announced this Monday that security services had seized on Friday 11 tons of cannabis in the region of Besancon. The record-setting dismantling operation was possible thanks to massive support from Moroccan and Spanish investigation teams.

France, Morocco, and Spain have cooperated on various criminal investigations, but the latest is the biggest operation of its kind that involved a tight cooperation between the three allies.

A statement from the public prosecution’s office in Nancy said Monday that police intercepted several vehicles, including a truck on the “A36 motorway toward Paris in the area of Besancon.”

Police arrested four suspects, including an Italian national during the operation, reported AFP.

France’s Minister of Interior Christophe Castaner expressed pride about the security collaboration between France and its two partners, highlighting how information from Spain and Morocco have been helpful in other criminal cases in France.

Castaner said in a tweet: “Congratulations to the judicial police of Strasbourg and the Central Office for the repression of the illicit trafficking of drug on this record seizure, realization of an exemplary investigation carried out with their Moroccan and Spanish counterparts.”

The operation was the culmination of a judicial investigation opened in 2017.

The prosecutor’s office said in the statement that investigations revealed the existence of huge trafficking between Morocco, Spain, France, and Belgium, according to AFP.

French Central Directorate of the Judicial Police launched the investigation in collaboration with Morocco’s security services and Spanish police, which provided “valuable elements for the investigation,” added the statement.

The amount of the cannabis seized on Friday is a record since 1999. Police had then seized 23.5 tons of cannabis in Boulogne-sur-mer, in northern France, added AFP.

Morocco maintains strong diplomatic ties with France and Spain, with which the North African country share a counterterrorism collaboration.

Throughout the year, Morocco’s police raided on several drug trafficking networks, seizing big amounts of multiple sorts of drugs, including cocaine, and cannabis.