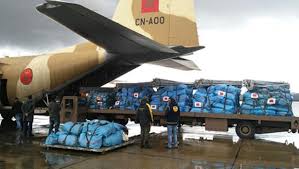 Hurricane Idai: Mozambique Expresses Thanks to Morocco for Humanitarian Aid

The President of Mozambique Filipe Jacinto Nyusi has expressed thanks to King Mohammed VI for the humanitarian aid provided to his country to alleviate the impact of hurricane Idai.

This came in a message he addressed to the Sovereign and that was conveyed Monday in rabat by Mozambican Foreign Minister José Condunga Pacheco to his Moroccan counterpart Nasser Bourita.

The Mozambican official told the media after his meeting with Bourita that “without this support, we would have faced a very difficult situation”. The first aid was a success, Pacheco said, adding that the country’s reconstruction program had been launched.

Following the massive floods that destroyed last month swathes of lands leaving victims and considerable damage to fields and infrastructure, King Mohammed VI ordered the shipment of an urgent humanitarian aid to Mozambique.

The 39 ton-aid consisted mainly of tents, blankets and foodstuff.

The Mozambican Foreign Minister also announced that Mozambique is hosting the next Africa-USA Economic Summit, and urged the two countries to join forces to establish a business forum that will work for the continent’s economic development.

This visit provides an opportunity to reaffirm our commitment to strengthen solidarity, friendship and bilateral cooperation, particularly in the economic field and to establish a fruitful and solid relationship with the Kingdom, Pacheco said, stressing that it is also an occasion to discuss bilateral, continental and international issues.

For his part, Bourita noted that this meeting was an opportunity to discuss ways to boost bilateral relations, based on the historical relations between Rabat and Maputo.

The discussions with the Mozambican official also examined ways to implement cooperation mechanisms and build a relationship based on clarity, mutual understanding and respect for the interests of both countries so as to resolve regional problems rather than complicate them, Bourita said.