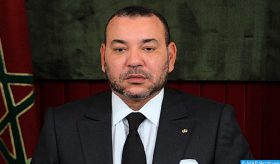 King Mohammed VI of Morocco has strongly condemned as a despicable terrorist act the attack that targeted two mosques on Friday in the city of Christchurch, New Zealand, killing several innocent victims.

In a message of condolence and compassion addressed to Mrs. Patsy Reddy, Governor General of New Zealand, the Sovereign, who says how he is deeply saddened and shocked by the news, expresses, in his name and on behalf of the Moroccan people, his strong condemnation of this abject racist and terrorist attack, which targeted innocent worships.

“This is a despicable violation not only of the sanctity of places of worship, but also of the universal human values of coexistence, tolerance and brotherhood,” the king states in his message.

The Sovereign extended his heartfelt condolences and deepest sympathy to the grieving families, and wished the injured a speedy recovery.

“Our thoughts and prayers are with you and the bereaved,” he adds.

According to authorities, at least 49 people were killed and 48 injured in the shootings at the two mosques.

A man in late 20s has been charged with murder and should appear in Christchurch court Saturday, Police sources said.

The suspect held extremist views but had not been on any police watchlists.