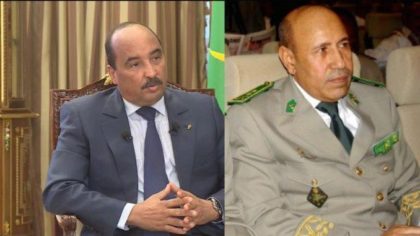 Outgoing President Mohamed Ould Abdelaziz of Mauritania has rejected rumors that he has imposed his defense minister as candidate of the ruling party for the presidential election, scheduled for the middle of the current year.

Abdelaziz in power since 2008 will not take part in this year’s election in compliance with the country’s supreme law that limits presidential mandates to two.

Defense Minister Mohamed Ould Cheikh Ahmed aka Ghazouani and former Chief of Staff has been chosen as the candidate for the presidential elections of the ruling Union pour la République (UPR), from which Abdelaziz hails.

Mohamed Ould Abdelaziz denied any influence in the choice of his close and longtime friend as presidential candidate.

“I did not chose him. He filed his candidacy himself,” the outgoing President said when asked if he proposed a candidate for this year’s election.

The Mauritanian opposition has long fought for Abdelaziz to respect the constitution after they sensed last year’s constitutional reforms as a stepping stone for the former putchist to extend his stay in power.

Last month, the Mauritanian opposition, which had already said that it would participate in the coming elections, sent a letter to the government including its demands for transparency and fairness in the upcoming presidential election. The letter called for a calming of the situation, to establish a normal political climate, abandoning the logic of hostilities and confrontation.

The opposition insisted on the need to respect the Constitution, laws and rules of good governance and to put the state at the service of all.