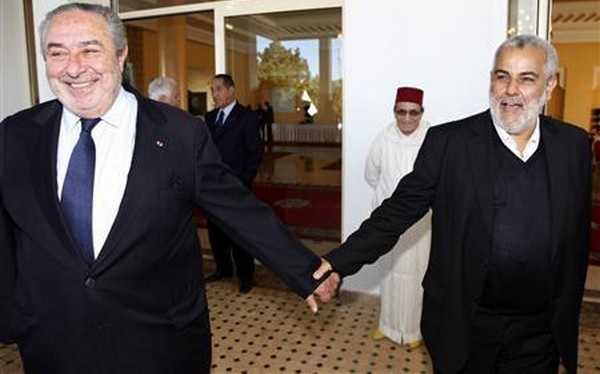 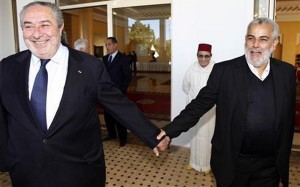 A synagogue has been refurbished and inaugurated by a Head of a government. This is no news, if the event is taking place somewhere in Europe, the Americas or inside Israel. But when the synagogue is located inside the walls of the spiritual capital of an Islamic State, when it is dedicated, after having been rehabilitated, by the head of an Islamist party, and when the dedication ceremony is placed under the aegis of this country’s leader, the news is actually breaking, shattering, unprecedented.
This unprecedented event actually took place earlier this week in Morocco, precisely in Fes, when Abdelilah Benkirane, the head of the government and the head of the Party for Justice and Development (PJD) which is leading a governmental coalition in the North African country, made the trip to Fes to preside over the dedication ceremony of the “Slat Alfassiyine” synagogue, placed under the patronage of King Mohammed VI.
This important Jewish place of worship, dating back to the 17th century, has been renovated thanks to the support of various private individuals, including the late Simon Levy, the Toledanos, and the Berdugos, the Foundation for Moroccan Jewish Cultural Heritage, the Jewish community of Fez, and also thanks to donations by Germany.
The “Slat Alfassiyine” synagogue is one of several synagogues located in the Mellah, the Jewish district in the city, which have been closed for years but which have been or are being restored with private donations or with UNESCO funds.
The Slat Alfassiyine Snagogue is a landmark monument of Fez, which is classified as World Heritage by UNESCO, and which also hosts Al Karaouine University, one of the oldest and largest spiritual and educational centers in the Muslim world that was founded in 859 by Fatima Al Fihria.
Many Synagogues in Fes, also considered as particularly representative of the Moroccan Judaism specific rite, date back to the golden era of the Jewish community in the city, an era that lasted for nearly three hundred years, starting in the 9th century when Idriss II welcomed large numbers of Jews chased from Andalusia.
At that time, Jewish religious schools in Fes attracted bright scholars, poets and theologians. The Jewish community, which was renowned by its skills in manufacturing gold thread, lace, embroidery as well as jewellery making, was playing a prominent role in the city’s cultural and commercial life. Their influence on Moroccans’ way of life and traditions is still perceptible up to date.
King Mohammed VI has actually lauded the richness and diversity of his country’s spiritual components.
In a message read out on his behalf during the dedication of the Slat Alfassiyine Synagogue, the king said the refurbishment of the worship place is clear-cut evidence to “the richness and diversity of Morocco’s spiritual components and heritage.” He added that “Moroccans are deeply imbued by the values of coexistence, tolerance and harmony between the various components of the nation.” He also called for the restoration of all Jewish temples in Morocco to make of them not only places of worship but also a space for dialogue and cultural revival of the founding values of the Moroccan civilization.
Depending on the dynasty ruling the kingdom of Morocco or on the king at the helm of power, the Jewish community lived hardships at some times and opulence and renaissance at others.
In 1791-92, as an instance, Moulay Yazid expelled the Jews from the city and sent them to a nearby countryside. The Slat al Fassiyine synagogue was transformed into a jail and a mosque was built in the Jewish district. Later on, when Moulay Slimane took over the power, he ordered the destruction of the mosque, because, he argued it was “built on injustice”. The Jews were allowed back, their synagogue was reopened and they were able to pray there for many many years, till 1972 when it was closed. The premises were then used as a rug-weaving workshop and later on as a boxing training center.
Then, in 2010, the late Simon Levy, initiator of the Casablanca-based “Museum of Moroccan Judaism”, unique of its kind in the whole Arab and Muslim World, who was then president of the Foundation for Moroccan Jewish Cultural Heritage, launched a call to help restore and safeguard the monument, symbol of the Fassi rite which is different, to some extent, from the Sepharad rite that was generally followed in the rest of the country. The Fassi rite is preserved in the Ahabat ha Qadmonim ritual, “Love of the elders”, which has crossed the centuries before being collected and printed in the 19th century.
Simon Levy’s call was heeded and funds were collected to cover the rehabilitation costs which amounted to over $150,000.
In the meantime, Simon Levy passed away, but his hope has been fulfilled and the Slat al Fassiyine synagogue has been safeguarded.
Another Jewish worship place in Fes, the Ibn Danan Synagogue, also dating back to the 17th century, was first restored in the 1870s. But the building could not stand the test of time. As the roofs collapsed and the infiltrated water damaged walls, plaster and wood, the place was closed. However thanks to the efforts of Moroccan authorities, the Jewish community of Fes, and the World Monuments Funds, the synagogue was refurbished and reopened in 1999.
The presence of Jews in Morocco dates back, according to historians, to the II century BC. Moroccan Jews have occupied and still occupy high positions in the administration.
During the first half of the past century, the Jewish Moroccan community was 250.000 strong. The numbers dwindled over the years but Morocco still counts the largest Jewish community in North Africa.
Each year, Moroccan Jewish expatriates come from around the world to celebrate their Saints buried in Ouezzane, Safi, Essaouira or Taroudant, in a festival called hiloula. Their Muslim countrymen usually join them to celebrate their shared traditions and memories.