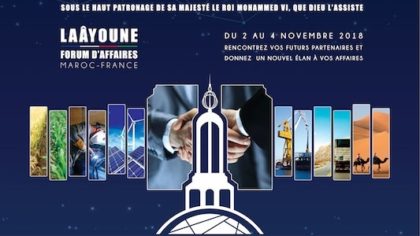 Some 150 French business leaders flocked to Laayoune to take part in the third Morocco-France Business Forum opened Saturday in the Sahara major city, with the aim to create an efficient, dynamic and content-rich meeting space between Moroccan and French economic operators.

Several French participants vowed from the start to further develop their investments in the region, mainly in the areas of infrastructure, industry, agro-food, fisheries, renewable energies, tourism and vocational training.

The first day of the forum, organized in partnership with the Chamber of Commerce and Industry of France in Morocco and the Regional Council of Laayoune, highlighted by the conclusion of a series of conventions.

In an opening address, chairman of the French Chamber of Commerce and Industry in Morocco (CFCIM), Philippe-Edern Klein, pointed out that Morocco’s southern provinces are the “ideal hub” to the African continent.

“The region of the South benefits from ambitious investment programs, both public and private, and major infrastructure projects that make it the ideal hub to the African continent,” Klein said, according to MAP.

He noted in this connection that the region of Laayoune-Sakia El Hamra offers investors incentives and many competitive advantages, particularly in the sector of real estate, or access to a pool of qualified human resources.

“If we have chosen Laayoune to host, after Casablanca and Paris, this third edition of the Morocco-France business Forum, it is because we are convinced of the potential of the southern region, whose growth rate is one of the most dynamic in the Kingdom,” he stressed, calling on Moroccan and French economic operators to promote and seize these great opportunities.

He also announced that CFCIM is committed to the implementation of two major projects, namely a latest-generation industrial park over 40 hectares in the city of El Marsa (25 km from Laayoune), and a campus that will host, inter alia, the French Business School.

State Secretary for Foreign Trade, Rkia Derham, welcomed the fact that this event coincides with the commemoration, on Tuesday, November 6th, of the anniversary of the Green March, which allowed Morocco to complete its territorial integrity.

“Today is a success for Morocco, the French flag flies alongside the Moroccan flag in Laayoune, it is a setback for Morocco’s opponents,” she said, adding that foreign investments in the region are increasingly growing.

President of the Laayoune-Sakia Al Hamra region, Sidi Hamdi Ould Errachid, on his part, said the Region is a key player in terms of investments attraction and development.

He said under a convention signed on the sidelines of the forum, the city ceded to the Chamber of Commerce and Industry of France the management of the industrial zone of Laayoune.

By 2021, Laayoune’s regional development plan provides for a 49 billion Dirham investment, bringing its growth rate to 8%.