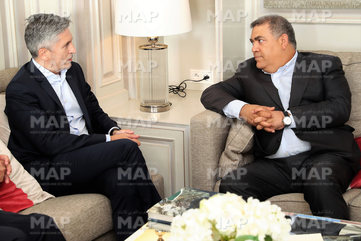 Migration topped the agenda of a meeting between Interior ministers of Morocco and Spain Abdelouafi Laftit and Fernando Grande-Marlaska who both stressed on Saturday in Madrid the need for promoting legal migration as Spain became the main gate for illegal crossings to Europe.

The EU has pledged to increase aid to Morocco to €140 million to help it manage migration pressure.

Spain has urged the EU to increase its aid to Morocco following the example of Turkey where €6 billion in EU aid helped seal the Balkan route, the main entry to Europe in the wake of the Syrian refugee crisis.

On Sunday, some 300 migrants attacked a fence separating the Spanish occupied city of Melilla from Morocco. One migrant died and 200 made it to the enclave in the jump over.

More than 43,000 migrants have made the crossing to Spain since the start of the year, including around 38,000 by sea, according to the UN International Organization for Migration (IOM).