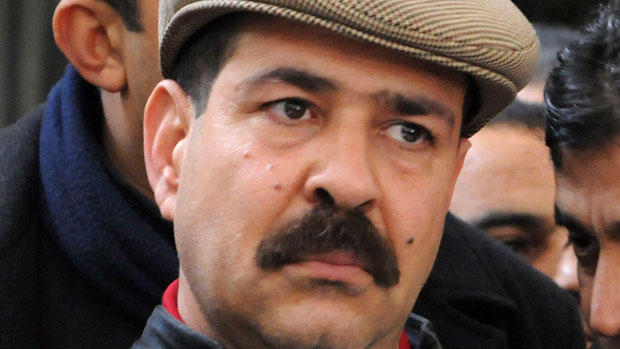 Thousands of angry Tunisians have mourned the assassination of opposition political figure Chokri Belaïd, a prominent opponent of the Islamist-led government of Hamadi Jebali.
They took to the streets of the Tunisian capital in a huge march against the killing of the human rights militant who was shot in the head and the chest outside his home on his way to work.
The assassins shot Belaïd point blank several times as he was entering his car on the morning of February 6 near his home and then fled on a motorcycle, Interior Ministry said.
The liberal opposition leader with a bushy mustache was 48, married and the father of two. Belaïd was secretary general of the leftist Democratic Patriotic Party. He was an forthright critic of the government, accusing it of turning a blind eye to violence by religious hard-liners.  He spoke on February 5 at a news conference in Tunis and denounced the “climate of violence that has become organized and systematic,” and called for a “national dialogue to contain the trend of violence.”
Before his assassination, Mr. Belaid accused “mercenaries” hired by the Ennahda party of carrying out an attack on a Democratic Patriots meeting.
His killing was denounced worldwide and described as an “act of terrorism” and “political assassination”. France, the United States, Germany and many other countries from the West and Islamic world have decried the murder of Belaid who was hoping to accomplish what the Tunisian revolution stands for.
Tunisian President Moncef Marzouki, who cut short an overseas trip and cancelled a scheduled appearance at an Islamic summit in Egypt, has condemned the slaying of Belaid who becomes the first political leader assassinated in post-revolutionary Tunisia, cradle of the Arab Spring. “There are many enemies of our peaceful revolution. And they’re determined to ensure it fails,” Marzouki said, stressing that this hateful criminal act would not derail the North African country’s transition to democracy.
“Chokri Belaid was murdered this very day knowing I was going to be speaking to you,” he told the European Parliament in Strasbourg, France. “This is a letter being sent to us that we will refuse to open. We reject that message and we will continue to unmask the enemies of the revolution”, added the Tunisian President, a member of a secular party in the governing coalition gathering the leading Islamist Ennahda party and two other political formations, Ettakatol and the Congress for the Republic.
In an address to the nation, the Prime Minister, Hamadi Jebali, called the killing “a political assassination and the assassination of the Tunisian revolution”. He also said that he would form a new government of technocrats to guide the country to elections “as soon as possible.” Hamadi’s decision was a clear concession to the opposition, which has demanded a reshuffle of the Islamist-dominated government.
The Ennahda party has denied any responsibility in Belaid’s assassination, terming the slaying a “heinous crime” that targeted the “security and stability of Tunisia.”
The Party has however turned down Jebali’s decision to dissolve the government and form a new cabinet of technocrats, claiming the country needs in the current juncture a political government.
As mobs stormed the offices of Ennahda party in several cities, including Sidi Bouzid, Sfax, and Monastir, thousands of people gathered in front of the interior ministry to express anger at Tunisia’s government while others marched in the streets chanting “the people want the fall of the regime”, while others shouted “Resignation, resignation, the cabinet of treason!”.
Following Belaid’s assassination, four Tunisian opposition parties decided to quit the Constituent Assembly and called for a nationwide strike. The UGTT, the country’s strongest trade union, claiming 500,000 members and having offices throughout the country, has not reacted so far to the general strike call.
The political assassination, whose responsibility has not been claimed yet by any side, is raising fears that the incident might push the country into more violence and chaos.
CATEGORIES FeaturesHeadlinesTunisia
Share This