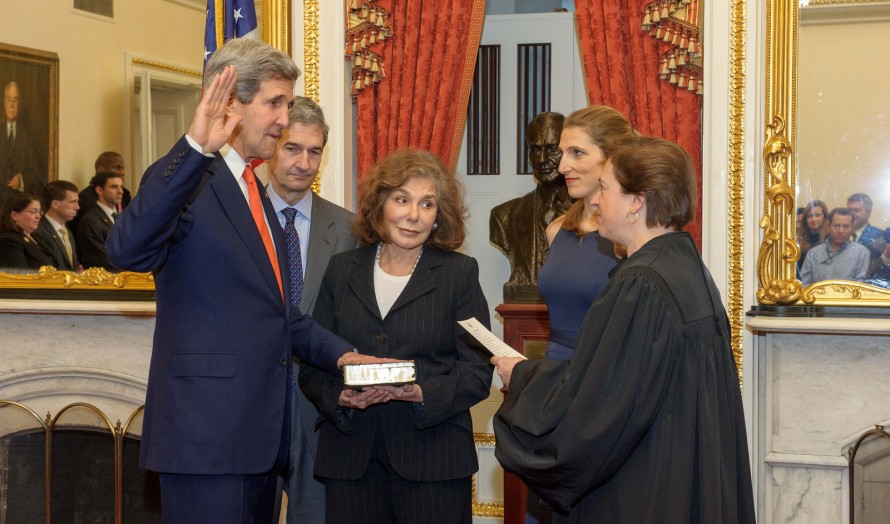 The stalled peace talks between the Israelis and Palestinians, the civil war in Syria, Iran’s nuclear program, North Korea, the Arab Spring uprisings, Afghanistan, Iraq and the growing threat from Islamists in North Africa are among the major hot foreign policy issues awaiting America’s new Secretary of State, John Kerry.
In addition to the thorny and delicate Middle-East issues, Mr. Kerry, the 2004 Democratic presidential candidate and successor to Hillary Clinton, will have also to keep an eye on China and Russia while continuing to nurture U.S. relationship with allies in Asia and Europe. He’s got certainly a plate full of problems that really don’t have easy resolution.
The top US diplomat is aware of the unfinished business he inherits and pledged to build on Hillary Clinton’s record and the president’s vision. The former Massachusetts senator travelled extensively around the globe as a diplomatic troubleshooter to mend strained relationships. The tall, somber-faced, 69-year-old politician is an impressive speaker and has a natural ease with foreign leaders. He has gravitas and does not rush decisions. He was member of the powerful Senate foreign relations committee for 28 years and served as its chairman for the last four years.
Despite the complex challenges ahead and the heavy agenda with overlapping crises, the senior senator has the adequate experience and skills that enable him to do the job. His 30-year public career gives him all the necessary credentials to be Secretary of State.
“Over these many years, John’s earned the respect and confidence of leaders around the world. He is not going to need a lot of on-the-job-training,” U.S. President Barack Obama said commending his new Secretary of State’s “extraordinarily distinguished Senate career” and military service “with valor” in the Vietnam War.
“I think it is fair to say that few individuals know as many presidents and prime ministers or grasp our foreign policies as firmly as John Kerry, and this makes him a perfect choice to guide American diplomacy in the years ahead”, Mr. Obama said, underlining the central role he played in U.S. major foreign policy debates for nearly three decades.
Mr. Kerry, who becomes America’s 68th top diplomat, believes in “soft power.” He upholds diplomacy rather than war and opposes the use of force. “We cannot afford a diplomacy that is defined by troops or drones or confrontation”, he stated during his Senate confirmation hearing.
He has already started work making his first phone calls as a Secretary of State to Israeli Prime Minister Benjamin Netanyahu, Palestinian President Mahmoud Abbas, and the foreign ministers of Canada and Mexico, Turkey, Japan and South Korea.
Several political analysts firmly believe that American foreign policy will not change with the arrival of Mr. Kerry. They say he won’t change America’s approach to the world even if he genuinely believes in the power of diplomatic engagement and is wary about interventionism. But, the world will find out soon what kind of diplomacy he will lead as the US treads the line between global enforcer and peacekeeper. One should expect steadiness and no major diplomatic victories for Kerry as the Obama administration is trying to steer the US away from armed conflicts and wars.