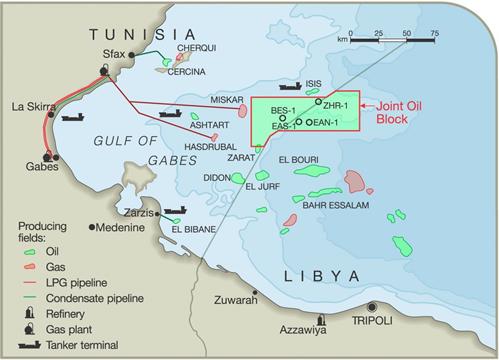 Since the conclusion of a preliminary agreement with Canadian oil and gas exploration and production company Sonde Resources in December, PA Resources (PAR) is still looking for farm-in partners for the Zarat license offshore Tunisia. The two companies hold the joint oil block license north of the Zarat concession, concerning unitization principles for the Zarat field.
Work on a joint plan of development continues, and this is expected to be submitted to the Tunisian regulatory authority around mid-year. Their search might however be heavily affected with the rise of insecurity in the region coupled with the political crisis in Tunisia.
The two companies are engaged in a technical evaluation of the reservoir and results are suggesting that gas recovery could be feasible after initial oil and condensate production. Evaluation also continues for the Zarat license, based on a recently updated seismic model. The license has been extended until 2015, with a commitment to drill an appraisal well on the Elyssa field and an exploration well on another structure. The latter will be drilled later on this year depending on the positive outcome of the farm-out of the Zarat license.
Tunisia, which is engaged in advanced talks with the international Monetary Fund for an emergency loan, is exerting efforts to revive its economy and attract funds. However, in view of the deteriorating security situation, as shown by the assassination on Wednesday of out-spoken opposition figure Chorki Belaid, investors are rather unwilling to invest in such an unfavorable environment for now.
Unless Tunisia gets its political stability back, investors to partner with on the Zarat license offshore will be hard to come by.
PA Resources is an international oil and gas company with operations and assets in nine countries. It focuses on three regions: North Africa, West Africa and the North Sea.
CATEGORIES BusinessEnergyFeaturesHeadlinesTunisia
Share This