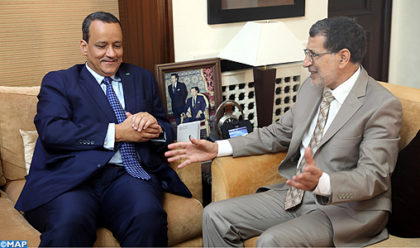 The two countries foreign ministers, who met Thursday in Rabat, underlined the shared willingness and strong determination of their governments to lift their bilateral relations to higher levels.

Morocco’s top diplomat Nasser Bourita and his Mauritanian peer Ismail Ould Cheikh Ahmed hailed on this occasion the longstanding ties existing between the two countries’ people. They reviewed the situation of the Arab Maghreb Union and the challenges facing Maghreb integration.

Talks between the two ministers also covered latest developments on the Arab, regional and international scene. They condemned terrorism in all its forms, calling for the reinforcement of dialogue and security cooperation to counter this global threat through a comprehensive approach.

Bourita and Ould Cheikh Ahmed decided to convene next year the Moroccan-Mauritania Joint High Commission, which has not met since 2013. They also stressed the importance of this commission, the coordination of stands and political concertation between Rabat and Nouakchott on matters of common interests.

They called on MPs, businessmen and civil society actors in Morocco and Mauritania to work hand in hand and contribute actively to the positive dynamic generated in relations of the two countries.

During his two-day visit to Rabat, the Mauritanian Foreign Minister also held talks this Friday with Head of the Moroccan Government Saad Eddine el Othmani.

The Mauritanian Foreign Minister’s trip to Rabat is seen as an additional sign of the warming up of Nouakchott-Rabat relations after the two countries exchanged ambassadors lately.

The trip took place less than 48 hours after Ismail Ould Cheikh Ahmed held a working session with Morocco’s ambassador to Nouakchott, Hamid Chabar, and the president of the National Union of the employers of Mauritania (UNPM), Zeine El Abidine ould Sheikh Ahmed. A vast program of cooperation between the two countries’ private sectors was approved during the working session.

In the context of relations warming up, Morocco is about to open a new border crossing point with Mauritania, at Gueltat Zemmour (in the southeast of the kingdom), the second after that of Guerguarat, located in the extreme south-west of the kingdom.

This project, whose feasibility study is underway, was announced recently by Abdelkader Amara, Minister of Equipment, Transport, Logistics and Water.