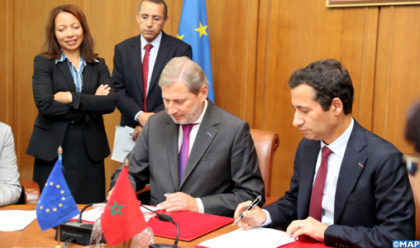 The agreements, related to the EU-funded programs: “Competitiveness & green growth” and “social protection reform in Morocco”, were sealed during the visit European Commissioner for European Neighborhood Policy & Enlargement Negotiations, Johannes Hahn is currently paying to the North African Kingdom.

According to a statement from the European Union, the program “Competitiveness and green growth”, which is worth more than 1.15 billion dirhams, supports auto-entrepreneurs, first-time exporters and promotes business climate and the emergence of recycling channels.

The program of support for social protection reform in Morocco “is a new chapter of [our] reinforced partnership, which will allow to advance together towards a more just and more egalitarian society system society,” explained Johannes Hahn.

This program, which benefits from European aid worth 1.19 billion dirhams, aims to support the Kingdom’s efforts to upgrade social protection. It thus contributes, according to Johannes Hahn, “to the reduction of inequalities and to the improvement of the social cohesion and human development of Moroccan society through the promotion of equitable access to basic social services”.

Hahn described his visit to the country as “a sign of EU commitment to support Morocco carry out on its own priorities”.

During his trip, the European Commissioner will meet with the Kingdom’s top officials including Head of the Government Saad Eddine El Othmani, Minister of Foreign Affairs Nasser Bourita and Minister of Economy & Finance Mohamed Benchaaboun.

The European Union is strongly committed to supporting Morocco in building a sound, inclusive and sustainable economy. It encourages investments promoting an inclusive growth, job creation and sustainable development in the country.

Between 2014 and 2017, the EU has allocated €807 million in bilateral assistance to Morocco. The two sides are committed to strengthening further their strategic partnership, political dialogue and trade relations.

The EU has extensive ties with Morocco in trade, political and security matters. Morocco plays a key role in the region in the fight against terrorism, illegal immigration and drug trafficking.