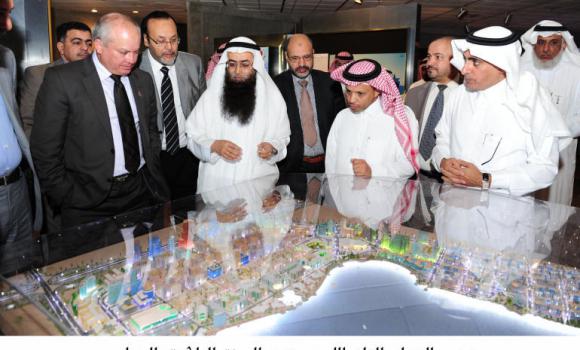 Libya has called on Saudi economic operators and financiers to invest in the North African country mainly in the oil and gas industry sector.
The call was launched by visiting Libyan oil and gas minister, Abdulbari Ali Al-Arousi, at a meeting with executives of the Saudi Eastern Chamber of Commerce and Industry.
The Libyan official surveyed the incentives granted to foreign investors at large and to Arab operators specifically, pointing out that his country’s openness to the public and private sectors in the Arab world emanates from Libya’s need for support from its Arab brothers in all fields, like education, tourism, health and infrastructure.
The official said Libya is projecting to establish an institution responsible for foreign investors’ affairs, especially Arab investors.
He revealed that some Saudi investors are already engaged in high level discussions and some have asked for the establishment of a free trade zone which will probably be in misrata.
He underscored the huge investment opportunities provided by his country’s economic sector and its geographical location which makes it easy for operators to penetrate European and African markets.
The official who urged however Saudi investors to prioritize the promising oil industry, said there are opportunities for drilling oil wells, building oil warehouses and oil storage tanks to increase capacity, besides providing the support services required for developing refineries and the establishment of petrochemical factories. In addition to that, several oil projects need maintenance, he said.
He also expressed Libya’s desire to learn from the Saudis’ vast experience and capabilities in the oil and petrochemicals fields, mainly in natural gas prospecting and production.
CATEGORIES FeaturesHeadlinesLibya
Share This