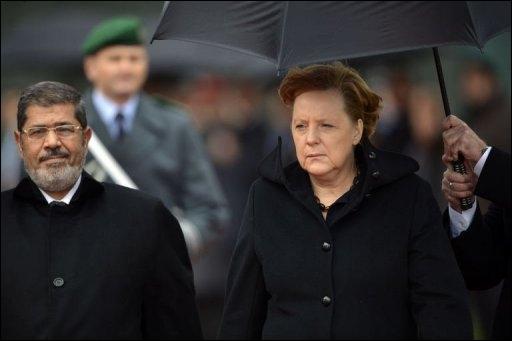 In what seems to be a desperate call due to the continuous deteriorating economic situation in his country, Egypt’s president Mohamed Morsi has launched a “Save in Egypt” campaign while paying a short visit to Germany.
The campaign is mainly targeting Egyptian expatriates who are called to support their native country’s economy by depositing part of their savings in Egyptian banks.
During his visit to Berlin, President Morsi met Chancellor Angela Merkel and many other politicians. Discussions mainly centered on economic relations between the two countries as well as the latest political developments in Egypt and the region.
Morsi also briefed members of the Egyptian-German businessmen forum on investment opportunities in the North African country.
The President, who sought to drum up support for his country’s ailing tourism industry, was quoted by his ambassador to Germany as saying that one successful tourism season may earn Egypt around $14 billion and allow the country to do without the International Monetary Fund’s loan.
Egypt made a deal with Germany to maintain a €353 million worth development project between the two countries. The cooperation project covers several sectors such as irrigation, agriculture, industry, education, scientific research, environment, infrastructure, and renewable and non-renewable energy.
German Politicians have however made it clear to Morsi, who was hoping to get a €240m debt relief from Germany, that financial aid was dependent on how much progress towards democracy is scored and on how earnest the new Egyptian government is to build a free society.
“The further Egypt develops and the more stability there is, the more German companies will become involved in Egypt,” Merkel was quoted as telling the Egyptian president.
CATEGORIES BusinessEgyptFeaturesFinanceHeadlines
Share This