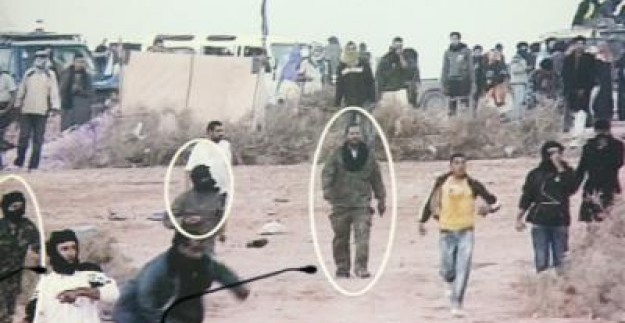 Twenty four individuals charged of committing violent acts in November 2010 during a protest movement in a makeshift camp at Gdim Izik and in Laayoune, Western Sahara, are appearing before a military court in Rabat this Friday.
The 24 defendants, all native of the Moroccan Southern Provinces, are charged with igniting violent clashes with security forces that resulted in 11 deaths and 159 wounded among the security forces and 2 civilian deaths among protesters.
It all started on the night of October 9, 2010, when a group of Sahrawis erected a protest camp at Gdim Izik, some 12 km. south-east of Laayoune, to claim social and economic rights.  As the number of protesters was increasing and tension was mounting, pro-Polisario individuals rallied the camp, took the protesters as hostages and prevented them from discussing with the concerned authorities their grievances. They later on took control of the whole camp and set up checkpoints to monitor all movements from and to the compound.
After the failure of talks with the stranded protesters and the separatists, riot police and security forces gave assault to dismantle the camp on November 8. They were countered by genuine armed militias, equipped with machetes, exploding gas canisters and Molotov cocktails.
Although the security forces were ordered not to use their firearms but only water cannons and batons, and although they lost several men in the clashes, they succeeded to dismantle the camps.
The pro-Polisario elements, seeing that their scheme to plunge the Western Sahara in violence failed, spread rumors in Laayoune alleging that the Gdeim Izik camp protesters were killed by Moroccan forces. The city inhabitants took to the street mainly to enquire about their relatives but separatist militiamen seized the opportunity to commit more acts of violence that resulted in widespread vandalism in the city. Fire was set to administrative buildings and vehicles, public and private property was destroyed, and police intervening to stop vandalism acts were fiercely attacked.
Footage showed police agents being tortured in the street and mutilated by knives before being killed. Some militiamen were captured in images while they were urinating on a corpse. Several persons among those arrested following these events were released but 24 remained in custody and were indicted. Their trial has been postponed twice before being set for this Friday.
The pro-Polisario foreign media and some international NGOs have criticized Morocco for bringing civilian defendants before a military court, but the government argued that the procedure is in compliance with the laws in force in the country which stipulate that any crime committed against military or security forces falls under the jurisdiction of military courts.
Some thirty European observers, including judges, lawyers and human rights activist, are following the trial of the 24 defendants who are facing heavy charges.
CATEGORIES FeaturesHeadlinesMorocco
Share This