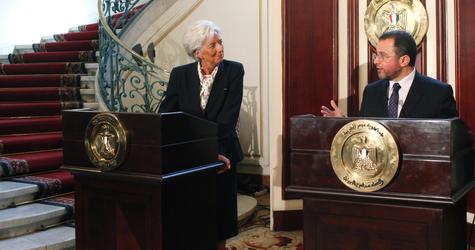 Egypt Pins All Hopes on IMF to Stabilize Economy

Egypt was pinning great hopes on the International Monetary Fund (IMF) promised loan to boost its economy, stabilize the country and attract investors and tourists anew.
The country is in dire need of this loan also to inject cash in the state’s reserves as foreign currency reserve can barely cover 3 months of imports and boost the Egyptian pound which is weakening against the dollar day after day.
At the central bank’s foreign exchange auction, the bank established a cut-off price of 6.6525 pounds to the dollar, prompting the currency to weaken to 6.6857 on the inter-bank market, where the authorities limit how far the currency can move.
Since the central bank started auctioning about a month ago, the pound has lost 7.5 percent of its value against the dollar and analyst believe that the trend will not stop as the currency continues to shatter multiple low records.
An IMF delegation is due in the country in the coming few days and there are fears that the pound could lose another 10 – 15 percent depending on the outcome of talks with the government.
Analysts are however rather pessimistic about getting the IMF loan. Egypt is still boiling and unrest is spreading to such an extent that the army chief warned that Egypt could become a failed state if the crisis continues.
And as the turmoil goes on, the government cannot enforce the reform program required by the IMF.
An analyst in Cairo said he is pessimistic about the IMF deal because of the ongoing violence. “I’d like to see the government sell the fiscal reforms it had planned to the people on the street now. If it does, there’s a good chance we will see more violence erupt. If it doesn’t, then we’re not getting the money,” he said.
CATEGORIES EgyptFeaturesFinanceHeadlines
Share This

North Africa Post's news desk is composed of journalists and editors, who are constantly working to provide new and accurate stories to NAP readers.
NEWER POSTAlgeria: Is Desert Tourism Doomed to Collapse?
OLDER POSTKanosak to Exploit Gold in Mauritania