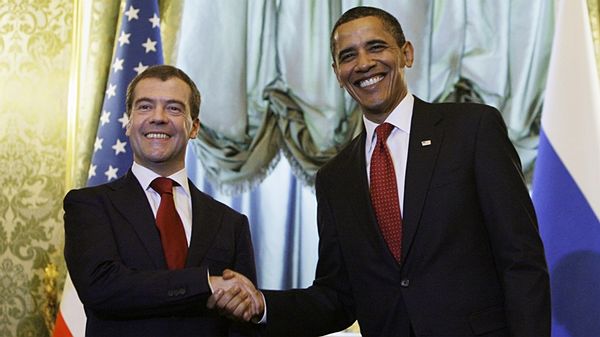 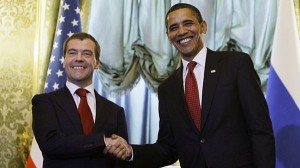 The Russian position in the Euro-Atlantic geopolitical region was supposed to turn towards careful cooperation following two major doctrinal shifts which have occurred recently. Obama’s policy of restarting the US-Russian relations (including the signing of the START treaty, which is clearly a Kremlin’s win) and opening the door to the East by inviting the Russian side to the missile defense system of NATO that is currently being developed should have resulted into a new round of détente of post-bipolar aggrieving ex-superpower. Since reality is never wholly defined by proclamations, it became obvious that 2011 marked a deterioration of Russian trust towards Western structures.
When trying to persuade somebody to significantly change his position, one must understand the internal world of his counterpart. A new ruler, Vladimir Putin, has involuntarily seen number of votes cast for his party fall to 49.3% from 64.3% in five years. Losing the constitutional majority in the State Duma might seem like a game-changing deal after the country had seen a near uprising against state manipulation during parliamentary elections – a first 50 000 demonstration since the break-up of the Soviet Union. Authoritative democracy, as Putin recalls domestic imperial history lectures, reportedly seeks to satisfy the majority of the Russian population. To be strong is not an asset but a must in the land of Siberian bears, so it is considered an imperative for the ruler of Kremlin to act with power – or to appear (again) significant at least in the eyes of his followers, and once in four years – voters.
Since the only instruments of superpower status left in the land of vodka are nuclear weapons and gas-exporting pipes, it comes as no surprise that the official doctrine of Russian military forces (signed by president Medvedev in February 2010 even before The Lisbon Summit of NATO which took part later that year) considers NATO as an enemy.
The Bear is Afraid
To find the reason why Moscow is threatening its neighbors and Europe in a broader sense is as simple as keeping an AK-47 Kalashnikov working – Putin feels both afraid and nostalgic of good old powerful times. Imagine sitting at his office and watching NATO expansion to the Baltic states, Ukraine turning into a new version of Yugoslavia with ‘inbetweeners’ approach, referred to as Titoism by the West, China demanding space on its Eastern flank, emancipating Turkey with strong NATO background, such as American presence from the Middle to the Far East along Russia’s long southern border. These facts generate a simple feeling. The country of well-respected poets is being besieged and once an imperium wants to appear powerful, it must strengthen its bonds and influence in the Middle East and North Africa (MENA) region.
To relate this kind of analysis and perspective to the Mediterranean region, one has to keep in mind the Russian imperialistic mindset. When looking at the Middle East and North Africa, the strategic position of Israel, a NATO Partner country and American closest ally, expands the Russian geopolitical interests. In geopolitical terms, once strongly pro-Russian Syrian regime falls or tear itself into rivers of blood, Moscow will turn out to have no real close ally in the region. Being faced with its sort of security dilemma, Russia’s military expenditures have nearly doubled in four years and were accompanied by the diplomatic offensive. Preliminary bombardment as diplomatic tactics have been used by Kremlin rulers for ages. The only two words Russians truly understand are power and strength.
Why to Wake (Him) Up
Here comes the cutting argument which could lead Russia to the real cooperation with NATO (and, by extension, the EU) and bridge the gap between diplomatic rhetoric and tangible results. The Russian economy is quite backward and addicted to gas. It is about time to make Russian top leaders to wake up to the reality and admit it. Recalling times of Ronald Reagan who used the SDI buildup to crash the Soviet Union without firing a shot and therefore won militarily –threatening Cold War with economic means can nowadays be translated as an urgent call to action. If Moscow stops taking NATO as an enemy, it can decrease its military expenditures and rebuild its domestic structures – a feat for which the country has been longing for since the times of Peter the Great.
As the amount of commodities under Russian freezing soil will undoubtedly decrease, the state will be forced by energy-security considerations and demographic trends to manage another important relationship with neighboring China. Since the American post-WWII, two-major-conflict doctrine has recently been turned to the less expensive shift towards the Asia and Pacific area, Washington is likely to keep a close and wary eye over the Chinese rise. As the Kremlin will not play a key global role (except if it tries to flex its nuclear muscles) in the coming decades, it will find out – sooner rather than later – that, particularly when compared with the Asia-Pacific region, Europe and the Euro-Atlantic civilization is a more predictable and trustworthy partner, with a much closer cultural affinity.
CATEGORIES FeaturesOpinions
Share This

North Africa Post's news desk is composed of journalists and editors, who are constantly working to provide new and accurate stories to NAP readers.
NEWER POSTReform is a risky business, but not reforming is even riskier
OLDER POSTOCP Signs Exclusive Licensing Agreement with Prayon