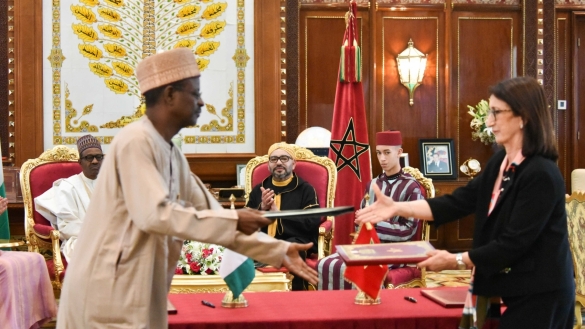 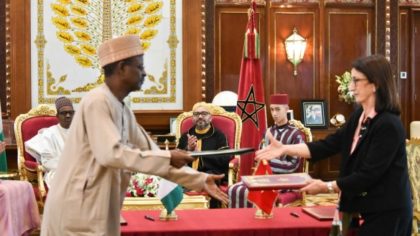 Morocco and Nigeria are moving forwards with their gas pipeline agreed upon in December 2016 during a visit by King Mohammed VI to Abuja.

The project featured prominently at a ceremony co-chaired Sunday by King Mohammed VI and Nigerian President Muhammadu Buhari, arrived earlier in Rabat on a two-day working and friendship visit to Morocco.

The ceremony was marked by the signing of a joint declaration on the project.

The declaration was signed by Morocco’s authority for oil and mines (ONHYM) and Nigeria’s National Petroleum Corporation (NNPC).

Speaking at the ceremony, head of ONHYM Amina Benkhadra and NNPC director general Farouk Garba Said gave a briefing about the content of the declaration.

They said that following feasibility studies “several routes were examined including onshore and offshore and a third option combining both.”

“In view of economic, political, judicial and security reasons, the combined onshore-offshore option was chosen,” they said.

The two officials also highlighted the beneficial impact that the 5.660 km-long pipeline will have on countries of the ECOWAS in terms of promoting trade, regional cooperation and energy diversification.

They said they will move to convince other West African countries to join the project and contact development banks to fund the project.

The pipeline will be built while taking into account the environmental dimension, they added.

“This project will give Africa new impetus at the economic, political and strategic levels and will elevate Morocco and Nigeria as leaders of south-south cooperation in the continent,” they said.

During this ceremony, Morocco’s phosphates company (OCP) and Nigeria Sovereign Investment Authority signed a Memorandum of Understanding to develop an industrial production plant for ammonia and derivatives in Nigeria.

The ceremony was marked by the signing of a third cooperation agreement under which Morocco shall offer Nigeria agricultural professional training and technical supervision.