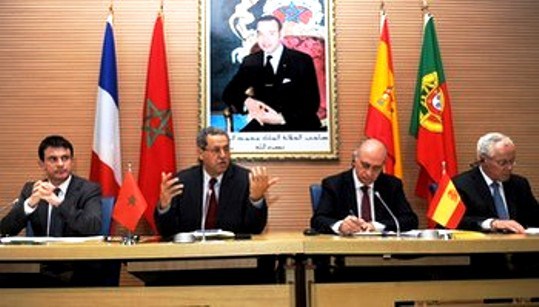 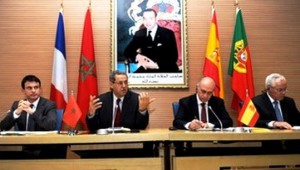 A security meeting that gathered last week in Rabat the interior ministers of France, Morocco, Portugal, and Spain agreed to enhance cooperation between the four countries’ police and security departments and consequently improve struggle against terrorism, illegal immigration and drug trafficking.
The four countries also agreed to upgrade their intelligence exchange cooperation mainly in matters of financial assets monitoring in a bid to expand struggle against money laundering and cut off terrorist groups’ access to funds.
This multilateral cooperation, that already existed at bilateral levels between the four countries, will enable these nations to join efforts to take up the security challenges facing up the region, especially with the upsurge of terrorist groups and the transfer of the large caches of weapons out of Libya that fell into the hands of terrorists and anti-government forces in West Africa and the Sahel.
Although Security Council Resolutions and reports by security affairs pundits had warned, in the morrow of the Libyan Revolution, about the serious http://me-confidential.com/risk of destabilisation posed by the dissemination in the Sahel region of illicit small arms and light weapons, the warnings went almost unheeded until the Mali crisis erupted.
The Rabat meeting that actually took place two weeks after France intervened in Mali to stop the advance of terrorist groups southwards, devoted a large part of its debates to the crisis in Mali and to the assessment of the security situation and challenges in the region, including the latest deadly hostage-taking operation in southeastern Algeria.
The document adopted by the Rabat meeting is seen an attempt to give a coordinated and efficient response to the threats endangering stability and security in the region.
The document outlines that the four countries’ interior ministers are all equally aware of “the extreme seriousness” of the terrorist threat from the Sahel and of the need for sustained coordination and intense exchanges between the four nations in order to prevent and combat effectively terrorism.
The officials have also voiced determination to consolidate their cooperation in matters of police training and to enhance exchanges of information and expertise between their respective departments and security services.
“Exchange of operational information between the four countries in the fight against terrorism is a shared priority”, the document underlined, adding that the four countries will improve in this regard the functioning of their cooperation mechanisms.
This quadripartite meeting is intended to lay the groundwork for broader regional cooperation in order to deal with various threats to stability and security in the region. In this regard, the interior ministers urged their respective security services to provide technical assistance to Sahel countries in the frame of joint actions whenever possible.
The four ministers agreed to hold, on annual basis, a meeting of the interior ministries’ anti-terrorism departments.
CATEGORIES FeaturesHeadlinesMorocco
Share This