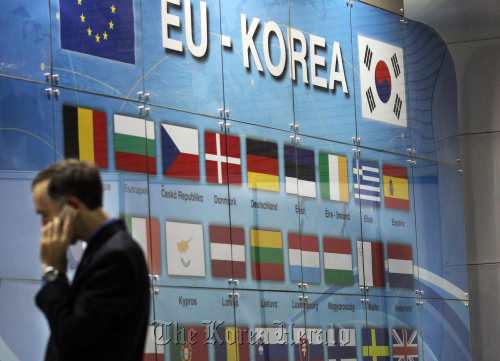 Korea-EU FTA One Year On: Lessons for North Africa

The free trade agreement between Korea and EU came into force on 1 July 2011. Under the FTA, the EU agreed to eliminate or phase out tariffs on 96% of goods, and Korea for 99% of goods, within three years. Within five years, 98.7% of imports would be tariff-free. Beside tariff reduction, the FTA facilitates trade in goods by reducing non-tariff barriers to market access, including elimination of quotas, standardization of product specifications, agreements on simplified product registration and testing, and others.

Furthermore, the FTA extends to trade in labor and capital, and exchange of information. It harmonizes the countries’ rules for business operation, including the treatment of workers, liberalization in cross-country financing and market access, and use of intellectual property. Tariff reductions between the two countries have been predicted to increase bilateral trade by about 20% in the long run. For Korea, the FTA has been predicted to increase economic growth by as much as 5.6%, and create over 250,000 jobs. Consumer prices have been predicted to fall, particularly in historically more protected industries, and especially in the smaller of the two trading partners – Korea.

Sources of Contention One Year On

Some 16 months after the FTA came into effect, Korean business owners are discouraged by the up-to-date developments. While some of the positive predictions have come true, a variety of macroeconomic, political and corporate-strategy factors have coalesced to dampen the potential benefits to the Korean side. More concretely, between January and August 2012, total exports from Korea to the EU fell by 16% compared to a year before. This is a reversal of the trend from the previous two years, when exports rose 15% and 4%, respectively. Comparing the first full year under the FTA with one full year before, Korean exports fell by 2% while EU exports rose 12%.

Clearly, current economic climate in Europe (and less so in Korea) is responsible for the reduction in bilateral trade, or the deceleration in its growth rate. Demand for Korean products in Europe is lacking, both by the private sector and by the public sector. This is apparent across many industries. For example, Korean winemakers and pork producers in particular have felt left behind. The domestic market share of Korean pork producers fell 14 percentage points over the past two years. Under the Trade Remedy Act, the Korea Trade Commission has officially recognized pork producers as victims of the FTA, awarded them damages, and enrolled them in competitiveness-improvement programs.

Policy responses even accentuate the effects of macroeconomic trends. While European consumers and governments tighten their belts, Korean government pushes forward several large-scale discretionary programs, including the Green New Deal and promotion of basic research, for which it procures specialized services and technologies. Under the liberalized public procurement rules, European providers benefit from these programs. European banking and insurance companies, software developers and consultancies have benefited from market-entry deregulation, and now provide specialized telecommunications, consultancy, legal and other business services in Korea.

These trends must be viewed in perspective. For one, balance of trade between Europe and Korea has traditionally been skewed in Korea’s favor, at around €15 billion of trade surplus annually (or 52% of the value of Korea’s imports). In the first year of the FTA, between July 2011 and June 2012, the surplus was down to €2.7 billion. In manufacturing, the values of Korea’s trade surplus with the EU in the 2007-2011 period are analogues to those recorded since the FTA was launched. Hence, the overall trade figures do not reveal any significant harm to Korean terms of trade under the FTA, merely a reversion of the bilateral trade toward balance. And, although overall Korean exports fell in the past year, exports of goods benefiting from reduced tariffs rose by double digits. For products that benefited from tariff reduction under the FTA, we can note that, during the same period, exports from China, Japan and Taiwan to Europe fell. In fact, other Northeast Asian nations view Korea’s FTA as a paragon for their own future trade pacts with the EU.

Finally, we should also note the dampening of Korea-EU direct bilateral trade due to the move by corporations in both countries to shift some of their production abroad. But this trend has clear advantages that don’t show up in statistics on final-goods trade. One, Korea’s foreign direct investment (FDI) in Europe is at an all-time high this year. This investment necessitates shipments of product parts, electronic equipment, and specialized business services from Korea. Two, collaboration between Korean and European companies in common production systems induces FDI by European multinationals in Korea. Since 2008, inward FDI to Korea from EU member states has been climbing by 22% annually. Lastly, bilateral FDI between Korea and EU facilitates transfers of know-how, as well as advancement in human capital and technology in both countries. All this means that the upsurge in Hyundai and Kia car sales in Europe doesn’t come from direct Korean exports, and may not be harmful to European labor or productivity. There are offsetting production increases in other European industries, for domestic or foreign markets. Similarly, sales of European products and services in Korea may not necessarily replace domestic production, while they create opportunities for Korean distribution, transportation, communication and other business-service firms.

The bottom line is that the currently available trade figures show some evidence of positive effects of the FTA for both the EU and Korea, but only time-tested and more-inclusive data will allow us to draw conclusions of the complex impacts of the FTA and draft robust trade-policy recommendations. And what lessons can North African countries learn from the EU-Korea FTA as a point of reference to be used in the negotiations of their own free trade agreements. In the past ten years, North African countries have progressed in liberalizing their trade relations with both the EU and Korea. Given macroeconomic conditions, and governments’ and corporations’ strategies in Korea and the EU, and given our up-to-date observations of the trade flows under the Korea-EU FTA, we can make several predictions about the pattern of exchange between North Africa and the two trading partners in the coming years.

First, longer-term, trade liberalization is of course expected to benefit all trade partners, by facilitating transfers of capital and know-how, advancement in human capital, more efficient use of resources, and lowering of consumer prices in all countries. However, shorter-term, the terms of trade effects are likely to be skewed in favor of one country (usually developed economy) at the expense of another (usually developing economy). Second, North African countries’ key economic sectors – agriculture, resource extraction, textile and clothing industries – may benefit from a liberalized trade regime, though its positive effect on their agricultural sectors may be rather limited in light of the present high rate of subsidization of agriculture in Europe and protectionism in Korea. Third, the high barriers to trade – both of economic and political nature – and structural barriers in the regional companies’ supply chains, coupled with a lingering risk of political instability across the North African region, put the brakes on business ventures as well as negotiations leading to prospective free trade agreements. Let’s hope that the prospects of long-term gains under successful trade pacts will encourage structural economic reforms and regional peace in the coming years.