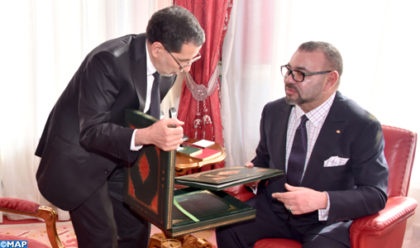 King Mohammed VI received Thursday at the Royal Palace in Rabat Head of the Government Saâd-Eddine El Othmani, who presented to the Sovereign a strategy meant to reform the Regional Investment Centers, whose purpose is to assist investors, both national and foreign, and to facilitate the paperwork for the setting up of projects.

The audience, held on the sidelines of the Ministers’ Council held under the King’s chairmanship, was attended by Royal advisors, Fouad Ali Al Himma and Yassir Znagui, and by Ministers of the Interior and of Finance, Abdelouafi Laftit and Mohamed Boussaid.

The restructuring of the Regional Investment Centers, known in Morocco as CRIs, was ordered by King Mohammed VI after he took note of the results of an audit conducted by the Court of Auditors late last year.

The audit, commissioned by the King to assess the operations of the centers, revealed that there are many dysfunctions preventing these centers from fulfilling their missions.

The CRIs fail to ensure a sound follow-up of newly created companies, grant little aid to small and medium-sized enterprises, in addition to the absence of studies and accurate data on the investments and the economic potential of the various Moroccan regions, found out the audit, which also pinpointed the low efficiency of the regional investment commissions.

To remedy the situation, the king gave instructions to the Head of Government to work with all the parties concerned to draft proposals for the reform of the CRIs and enable them to play their role in encouraging and promoting investment and exploiting the investment opportunities offered by the national economy.