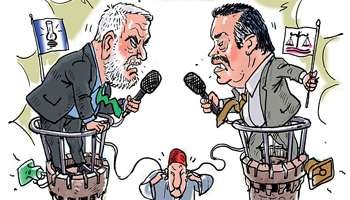 Relations between the Head of the Government, Abdelilah Benkirane, and the leader of the Istiqlal Party, the backbone of the governmental coalition, Hamid Chabat, are growing more strained by the day.

Chabat’s harsh criticism of the government’s performance and his repeated calls for a cabinet reshuffle are the main bone of contention between the two men.
Since he was elected Secretary General of the Istiqlal party (IP) in September last year, Chabat has been pressuring Benkirane to reshuffle the cabinet to improve, he argues, its performance and meet the voters’ expectations.
Earlier this month, he sent the Head of the Government and Secretary General of the Party of Justice and Development (PJD) a 30 page memorandum, asking him to assess the coalition cabinet’s work that Chabat himself deems as weak. Some members of the Istiqlal Party, one of the most powerful political parties in Morocco which has the second strongest parliamentary group at the House of Representatives with 60 MPs out of 395 seats, claim that the memorandum is part of the Party’s evaluation of the governmental action and that the Head of the Government should submit the document to the debate of the parties forming the majority as soon as possible. It is not all about the reshuffle. The document includes a number of proposals to improve the performance of the government, they argue, echoing their new leader.
Although Chabat referred the matter to the IP National Council which will have to decide at a meeting scheduled for next April whether the IP will remain in the coalition or not, Chabat and his followers seem determined to impose their diktat and to remain in the limelight.
For now, observers do not discard any possibility. Some commentators do not rule out an exit of the IP from the coalition if Chabat’s demands are not met, a possibility that may trigger a serious political crisis in Morocco that may end up in early elections, while others deem Chabat’s hullabaloos are a mere way to satisfy his ego and eagerness for more power.
This weekend, three weeks after Chabat submitted his memorandum, Benkirane broke the silence and asserted that his party will not yield to “pressure” or “blackmail.” At a meeting of a PJD association, Benkirane said defiantly that his party is not afraid because it is at the helm of power thanks to the polls and that if the Moroccans, not those who resort to manoeuvres, no longer want it, the PJD is ready to leave and go back to the ranks of the opposition.
Benkirane was thus replying to Chabat’s attacks. Without naming him, Benkirane was clearly alluding to the IP leader who is seemingly seeking the collapse of the government.
Meanwhile, Chabat and his inner circles blow hot and cold. Sometimes they repeat that the PJD is at the head of the government thanks to the support of the Istiqlal Party and that this party is ready to quit the coalition or to form another coalition without the PJD.
At some other times, they underscore, as did Chabat last week at a meeting with some allies in the coalition cabinet, their determination to maintain the IP in the government but insist on the need to conduct a cabinet reshuffle.
In his outline of this reshuffle, Chabat calls for the reduction of ministerial portfolios and the suppression of the position of junior ministers, mainly in the departments of the interior, finance and foreign affairs. He also demands that leaders of political parties, who are holding ministerial portfolios, like the Popular Movement’s Mohand Laensar (interior) or the Party for Progress and Socialism’s Nabil Benabdallah (housing), resign from their positions to devote their time to their parties.
In the meantime, sources close to the PJD said that the moderate islamist party is getting ready to form a governmental coalition with other parties that are now in the opposition in case the IP withdraws from the government. The most likely new allies would be the National Rally of Independents (RNI) and the Constitutional union (UC), which hold respectively 52 seats and 23 seats at the House of representatives, these sources said, underlining that the PJD is in a very comfortable position regardless of any decision Chabat may make.
Whatever the arguments of the ones and the others, the indirect exchange of remarks between Benkirane and Chabat and between PJD and IP members speaks volumes about the tense relations between the two major parties of the governmental coalition.
Will any one of them accept to bury the hatchet, or will the war between them go on until it leads to early elections and a change of the balance of power in the political landscape?
Until then, the showdown continues between a Benkirane who makes every effort possible to remain at the helm of power and a Chabat who claims that he just wants his party to have a stronger say in a more performing cabinet. What about the personal ambitions?
There is none! So they say.