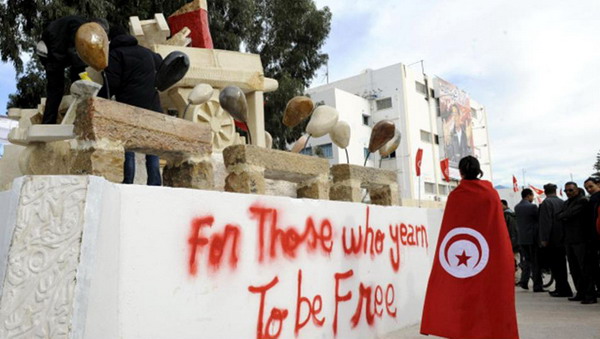 Tunisia: A revolution that kindled frustrations not hopes

Two years ago, Tunisia’s Jasmine Revolution toppled Zine al-Abidine Ben Ali’s dictatorship and ignited the first flames of what would be called the Arab Spring. At the same time, it kindled Tunisians’ hopes and dreams for a better future, a better Tunisia where democracy, freedom and social justice will prevail.

Two long years have elapsed, elections were held, an interim government, led by an Islamist party, is now running the country but the deep change Tunisians were expecting is not at the rendez-vous. Worse! After the revolution, the future is uncertain, political, social and security tensions are increasing, the economic outlook is gloomy and the frustration of Tunisians from all walks of life is growing. Some analysts have even warned that the people’s dissatisfaction and the continuing unrest might plunge the country in the quagmire of chaos.

The past year was actually marked by several protest movements and strikes that sometimes ended in violent clashes between the protesters and law enforcement agents.
Many commentators have underscored the frustration of the Tunisians who are tired of this situation of wait and see. “There is nothing to wait for and there is nothing to see. Nothing has changed and nothing has been achieved,” Latifa told us over the phone. She was about to join her brother in the U.S when the revolution broke out but she was so thrilled about the change taking place in her country that she changed her plans. Now, she deeply regrets her decision, she says.
Many other Tunisians share Latifa’s disappointment. “We see no change” is their leitmotiv.

After the revolution, the political landscape is blurred, the economic situation is deteriorating, investors and tourists are turning away, the new constitution drafting is staggering and insecurity and extremism are spreading. On the very eve of the commemoration of the second anniversary, the Tunisian presidency announced the arson of a mausoleum in a tourism town near capital city Tunis by some extremists, (understand Salafists) and vowed that the crime against the country’s culture and history will not go unpunished. Amidst all this, the people’s genuine concerns and pressing problems and their hunger for freedom and dignity are ignored. The incident that happened on January 14 in Sidi Bouzid, where the revolt began in 2010, when the Tunisian President Moncef Marzouki and Parliament Speaker Mustafa Ben Jaafar were “welcomed” by stone and tomato-throwing evidences the extent of the anger and frustration of the population.

Meanwhile, politicians try to be reassuring. In speeches on the occasion of the anniversary, many officials and political figures, including Prime Minister Hamadi Jebali, called for unity and pledged to spare no effort to push the country forward on the path of democracy, economic growth and progress.

As a token of these pledges, the government chose the anniversary celebration to sign, during a National Constituent Assembly session in Tunis, a social pact with the Tunisian General Labor Union (UGTT). The government presented the agreement as an implement to secure social peace, political stability and economic growth. Observers remain skeptical however as to the impact this social pact will have at the economic and social scales and on citizens’ everyday life.

At the start of the revolution, Tunisians were too enthusiastic. Two years later, they are deeply disappointed. But are two years long enough to redress decades of corruption, social inequalities and dictatorship? Historians will surely say that two years cannot reshape a country’s destiny, but for the people who have lived their entire life repressed and muzzled, the people who have yearned for years for democracy and freedom, the people who do not see any bright prospects, for these people change is taking too much time to materialize.

Are the government and various political players aware that patience has a limit, especially when the situation has been unbearable for a long time, and that too much frustration leads to rupture? It is up to them to give an answer.