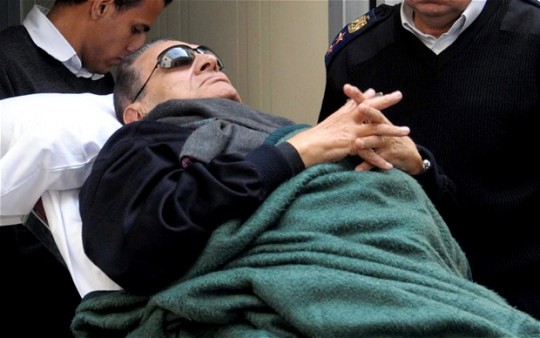 Retrial of Mubarak May Spell More Trouble for Egypt

It seems that Egypt is heading for more trouble and showdown between the Muslim Brotherhood and the Liberals as the country braces for the re-trial of the toppled former Egyptian President Hosni Mubarak. This retrial is a real test of the independence of the judiciary system under the Muslim brotherhood-led government.

Mubarak, who was sentenced last June to life in prison after a criminal court found him guilty of killing protesters during the popular uprising that ousted him from power, has been granted a new trial.
The 84-year old ex-president and his former interior minister, Habib Al-adly had appealed their life sentences for the death of hundreds of protesters in the 2011 uprising in clashes with security forces.
An Egyptian court has accepted the appeals lodged by Mubarak and Al-adly and ordered retrial of their case. These high profile defendants insist they have not issued orders to open fire on protesters and deny abusing power and financial corruption charges. No date has been set for that judiciary showdown but it will probably take place next march. Some of Al-adly’s aides, who were acquitted earlier, will also be retried.
Supporters of Mubarak cheered after the announcement of the court’s ruling. The court also ordered a retrial in another case against Mubarak, his sons Alaa and Gamal and Hussein Salam, convicted of illegally exporting gas to Israel and abuse of power.
Mubarak’s two sons were indicted for alleged insider trading and using their influence to get state land at a fraction of its market price.
Many Egyptians have been crying out for the conviction — and even execution — of Mubarak to avenge not only the deaths but also the corruption, police abuse and other oppression during his nearly 30-year rule.
The court’s ruling has triggered widespread public anger and fueled criticism of a large number of Egyptians who say that little has been done to tackle country’s endemic socioeconomic woes.
To appease the growing public anger over impunity of former regime officials, Egyptian president Mohamed Mursi, backed by the Muslim Brotherhood, has been pushing for retrial of Mubarak and his aides. But this retrial is likely to deepen the polarization of the Egyptian society which looks more and more divided in a country still reeling from political turmoil.
According to some experts, the retrial of Mubarak will complicate further the struggle of his Islamist successor to assert his authority. It will also affect Egypt’s stability and ability to deliver sustainable growth, heralding more economic or political crisis.