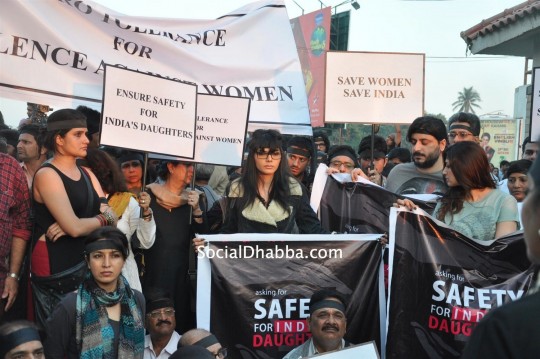 History Repeats Itself, India no Exception

The case of the 23 year old medical student raped and battered by six men in December 2012 is still making the headlines and setting India on fire. The young woman just passed away from her injuries in a Singapore hospital, where she was treated after her assailants left her for dead on the street. The Indian population is outraged. Was it sound to be so lenient with rapists? Was it necessary to wait until another young woman pays with her life so that authorities enact new laws to protect women? But it seems that as is often the case, a terrible incident is needed to make changes happen.
While the victim’s family members were all to their grief after they scattered the ashes of their child, the whole country took to the streets. Sick of the recurrence of rape that became so common, the population stood up to ask for tough measures to preserve the safety and honour of their mothers, daughters and sisters. Looking at the criminal statistics, the demand seems more than justifiable.
Over 228,650 of the total 256,329 violent crimes recorded by police in India in 2011 were against women – statistics that exclude non reported attacks, which is too often the case with rape. Last year, New Delhi, where the young student was attacked, reported more than 600 cases of assaults against women, while nationwide figures show one sexual aggression happens every 20 minutes. Indian government official data show that rape cases have increased by 20% in 2012. In 1971 registered complaints stood at about 2,487. In 2011, the number jumped to 24,206, recording a rise of 875% over the past 40 years. The rise can be explained by two factors: First, more and more young girls and women have accessed schools, universities and professional life and left thus their protective home, and second, the number of victims complaining to police is greater than before.

The situation has become intolerable, but this is nothing new. In 1972, Mathura, a 16 year old girl, was allegedly raped by two officers in a police station, while her relatives were kept waiting outside. The case became public, but the Policemen were not brought to Court until protests broke out throughout the country. Most of the time, the victims are offered a financial settlement instead of bringing the criminals before justice, or, more horribly, they are forced to marry their rapist.
These facts and traditions show the impunity enjoyed by men in the Indian patriarchal society, as well as the weakened position where women are maintained. The waves of protests against the prevailing chauvinism led the Government of India to amend the law in 1983. The result was the Evidence Act, which states that if a victim says she did not consent to the sexual intercourse, she deserves to be believed by the Court in the first instance. But that was not enough to deter rapists.
After the death of the 23-year-old student and amid the global outrage over this gang rape, Human Rights Watch has called on Indian lawmakers to focus on changing the criminal law to better protect women and girls from sexual assault.
Currently, the law narrowly defines rape as penile penetration, with other sexual offenses falling under the heading of “insult” to women’s “modesty,” the New York-based NGO said.
This undermines women’s rights and allows attackers to evade justice. It also reinforces damaging ideas of female modesty with their tendency to blame the victim – ideas reinforced by some Indian leaders who see forcing women to wear “sober and dignified” clothing as a solution to sexual assault, the NGO said.
Deficiencies in the sexual assault legislation do not exist in India only. The United Kingdom, India’s ex coloniser, vehemently denounces rape cases in India and British media put the blame squarely on Indian authorities. They seem to forget that until a recent date, similar examples of male bigotry were quite frequent and their frequency pushed the hand of the legislator. To mention one case only, in 1989 the R v. R trial featured a wife who claimed to have been raped by her husband. A wife was then still considered the husband’s property that he can use as he pleases. Had not she vowed to submit her soul and body to her husband forever? Such reasoning does not consider that a husband who is sexually assaulting his spouse is committing an aggression or transgression. The R v. R trial verdict was however pronounced in 1992: the husband was declared guilty and sentenced. The case paved the way to the adoption of a new legislation considering rape as a crime even within a married couple.
But that happened in England. How many other girls and women in India and in other countries where male dominion is still prevailing have to suffer the ordeal of rape to prompt legislators to change the Law? How many other deaths are necessary to push authorities and the society at large to remedy this injustice? In a society deeply rooted in a patriarchal tradition, in a society where female feticide is common (every 12 seconds, a baby girl is aborted in India. That’s about 7,000 girls killed every day just because they are females), in a society where having a penis is synonymous of all-might since childhood, laws can do little to change mentalities. It is up to women to carry on their struggle to preserve the liberties they have just acquired and to enlarge the scope of these liberties. It is up to women to foster public awareness to their crucial role in any society and bring their countrymen to realize that their own well-being and dignity depend on the well-being and dignity of their mothers and sisters, their spouses and daughters.  In India, where in 2020 the number of men will exceed by 30 million that of women, a cultural shift and a legislation change are more needed than ever.