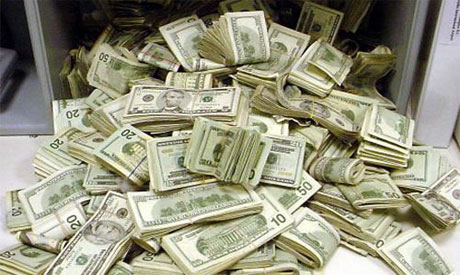 Egypt’s Central Bank proclaimed their foreign reserves reaching the “critical” levels after it had sold about 75 million USD in its first private auction to banks, Bloomberg reports.

Egypt’s foreign reserves are well below the levels prior to 2011 uprising against former President Mubarak, when the Central Bank commenced to support the Egyptian pound by selling dollars. These developments seem to follow the downgrading of Egypt’s credit rating from ‘B+’ to ‘B’ by the Standard & Poor’s in February 2012 citing a sharp decline in the country’s foreign exchange reserves and political upheavals.

The auction was a response to the announcement of Egypt’s Prime Minister, Hesham Qandil, that the government is about to resume the loan talks with the International Monetary Fund (IMF) later this month, and is one of the last attempts of the Central Bank to shun currency devaluation – the Egyptian pound has recently hit a record low, after the Central Bank imposed a new currency regime. The original IMF negotiations started in January last year and sought to stabilize the economy after the Arab Spring turmoil.

In January 2012, IMF spokesman, Gerry Rice, said that the talks would be the first step in the process leading to possible future financial assistance. Economists estimated that Egypt would need 15 billion USD in financing in order to avoid a financial crisis – the IMF was asked to contribute 4.8 billion USD to cover budget deficits. The loan talks lasted for about a year and a half, but no contract has ever been signed since the Fund demanded a broad political support for such an agreement, with the Muslim Brotherhood’s position on the loan being rather vague. The talks were eventually suspended amidst the fuss made by both Mursi’s opponents and supporters, and especially in the context of the socio-political instability that accompanied the nation-wide discussions over the future of Egypt’s new constitution.

In the wake of the last week’s successful referendum, Mr. Qandil said he would summon the IMF later this month to continue what they started a year ago. An IMF loan is essential to keep faith in the Egyptian market as well as to attract financial aid from elsewhere as the assistance from the World Bank, the EU and the African Development Bank had been chambered and made conditional upon the successful contract with the IMF.

The deal with the IMF has been indispensable for strengthening investors’ trust in Egypt’s economic prospects and making a balance of payments crisis much less likely. Yet, investors’ attention will now turn to the provisions of the deal and their hands-on applications in the fiscal and monetary policies. An emphasis is to be put on austerity, and especially on the sensible management of energy resources, while limiting their negative impact on vulnerable groups. Additional revenue shall be raised through a series of tax reforms – an increased progressive tax, an expanded sales tax, and a newly levied flat corporate tax of 25 per cent instead of the current two-tier system. It is hoped that the full implementation of VAT shall be completed by 2014.

So what will the New Year 2013 bring for this North African power? Egypt has indeed strong foundations of a robust economy but a continuous mismanagement and institutional problems undermine the country’s ailing finance and fiscal soundness. Year 2012 was marked by a deadlock caused by the political transition, but the last week’s “dubious yes” – as the Economist described Egypt’s constitutional referendum – seems to have brought a necessary impetus for hoisting the economy. In the event of an eventual contract with the IMF, Egypt would probably seek to revive its loan talks with other international donors. In such a case, financing the reform should not constitute a problem anymore – but what is not spoilt by the markets, can be done by limping institutions.