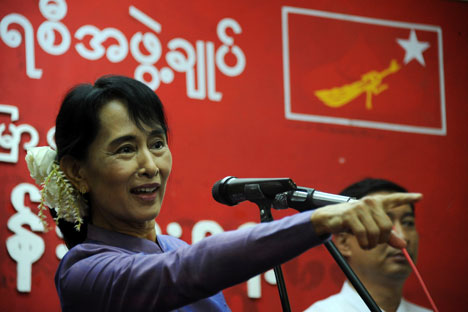 The transitions away from authoritarian rule in North Africa and Burma (also known as Myanmar) have often been compared to one another, highlighting major challenges but also reasons for hope.

When Aung San Suu Kyi, Nobel Peace Prize laureate and leader of Burmese opposition, addressed the Clinton Global Initiative Conference in New York in 2011, she compared Arab Spring demonstrators to Burma’s own pro-democracy movement. In a live broadcast from Burma, reflecting on recent uprisings in the Middle East and the role of the Arab Spring in spreading democracy, Suu Kyi observed that „movements like the ones that have been going on in the Arab countries mean something to peoples all over the world who are struggling for their own freedom. It reminded many of us in Burma of what happened in 1988 when our people rose up to ask for democracy. Of course our societies are very different but in the end we’re all human beings. And I think we can all understand each other’s hopes and fears and aspirations.“

Many lay people, but it seems that also many policymakers, tend to see democracy and dictatorship as mutually exclusive systems – it could either be one or the other one. They simply assume that when one system collapses, it is almost instantly replaced by the other that automatically takes root. A case in point is Francis Fukuyama’s famous and hotly contested conclusion that, with the collapse of the Soviet Union and the end of the Cold War, liberal democracy had decisively defeated, not only the Communist, but effectively all tyranny – in Fukuyama’s words, this landmark ‚event‘ then marked the „end of history“.

Fukuyama seems to be right that tyrrany all around the globe has overall been in retreat – as the dramatic changes sweeping from Indonesia to the Ukraine, South Africa, to North Africa and Burma have testified. However, in reality, states usually move incrementally toward a democratic rule, passing through fleeting periods of democratic reform that can sometimes last even for decades while its outcomes vary. In Burma, the military has ruled the country since 1962, and the current junta since 1988, when it cancelled the results of the 1990 free elections and violently suppressed a pro-democracy movement. Over the next two decades, Aung San Suu Kyi, who won the 1990 elections, languished 15 years under house arrest for her role as the opposition leader. Then, in 2011, a new supposedly civilian government initiated a series of sweeping reforms, most notably allowing Suu Kyi to re-enter politics.

So, to what extent are the current reform process in Burma and the democratic changes in North Africa comparable? And, is there any correlation between the Arab Spring and the developments in Burma? Some in Burma say that the Arab Spring rattled the Burmese generals and prompted the soft-liners‘ camp to seek to top-down reforms in an attempt to head off a potential explosion from below. In fact, rather than following the current development in North African countries where several free democratic elections took place in 2012, the top-down reform process now underway in Burma much more closely resembles the political situation in North Africa and the Middle East in the years leading up to the Arab Spring. Back then, various authoritarian governments in the region carried out limited political and economic reforms that were not so much democratizing reforms as they were carefully designed policies aimed at preventing any possibility of true democratization by allaying popular discontent with these regimes. To better illustrate the current internal political dynamics in Burma, you could simply imagine a situation in North Africa where Hosni Mubarak and Muammar Gaddafi have both hand-picked their successors, as respective presidents of Egypt and Libya, and the latter are now seeking to steer their societies through a series of reforms carefully undertaken to move the countries away from authoritarian rule.

It is interesting enough that the current Burmese nominally civilian government and the Burmese opposition express fundamentally different views of and attitudes to the Arab Spring. On the one hand, according to an article in The Nation with a title ‚Arab Spring Inspires Burma’s 88 Generation‘, prominent Burmese dissidents view “Arab Spring” events as a proof that Burma will inevitably follow the path of democracy. On the other hand, Burmese state-controlled media explicitly contrast the country’s ongoing reform process with the Arab Spring by positing that “despite the poetic title, the Arab Spring is the spring painted in blood and is supposed to end with troubles and poverty.” One English-language official paper also referred to the examples of Iraq and Afghanistan to demonstrate how “errors of strategy” condemn people to a “cycle of tears”, and then concluded that Burma has become a democracy “without suffering grief as in the above-mentioned countries“ because the former and current governments “helped the country walk on the road to democracy in a stable and peaceful manner”.

Democratization is a complex – and always incremental – process whose outcome is never guaranteed. It is also important to recognize that there is no such thing as an instant democracy and that democracy is, by nature, a volatile phenomenon that can both make progress and backslide. In any case, the collapse of tyranny is not the end of history, as Fukuyama mistakenly concluded – the recent events (not only) in North Africa, the Middle East and Burma have demonstrated that it is just its beginning.