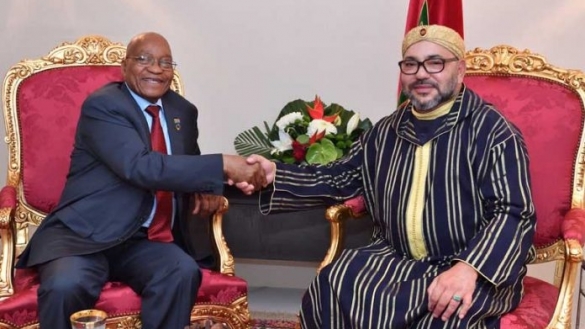 Towards a warming up of Relations between Morocco, South Africa 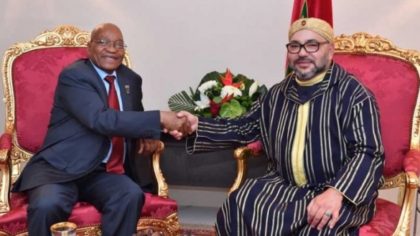 King Mohammed VI received on Wednesday in Abidjan President of South Africa Jacob Zuma, and the two leaders, who are both taking part in the 5th African Union-European Union Summit, talked about the future of their countries’ relations.

The meeting, the first between the two leaders, was described as “warm, candid and characterized by good understanding”.

King Mohammed VI and President Zuma agreed to join efforts to build “a promising future” for their two countries, which both impose themselves as models of political stability and dynamism in terms of economic development.

The two leaders discussed the establishment of an economic and political partnership that will strengthen the ties between the two states at all levels and agreed to maintain direct contact in order to build strong, lasting and stable relations and overcome the divergences that have characterized bilateral relations for decades.

On the diplomatic front, King Mohammed VI and President Zuma decided to appoint plenipotentiary ambassadors to Pretoria and Rabat.
The high-level talks thus break away with the animosity that characterized bilateral relations because of the Sahara issue and herald a new era of dialogue and cooperation that will open a new chapter in Moroccan-South African relations.

These talks also fall in the context of the rapprochement process initiated by King Mohammed VI with all African countries, regardless of their stand on the Sahara, out of his concern to promote Africa’s integration.

On the sidelines of the AU-EU summit, the Monarch also held talks with Angolan President Joao Lourenço, as well as with President Emmanuel Macron of France.

The King was also greeted by the Algerian Prime Minister, Ahmed Ouyahia, who was representing President Abdelaziz Bouteflika at the summit.

The participation of King Mohammed VI at the summit was highly acclaimed by AU officials as well as by African and EU heads of delegations. It is Morocco’s first participation in the event since it reintegrated the AU.