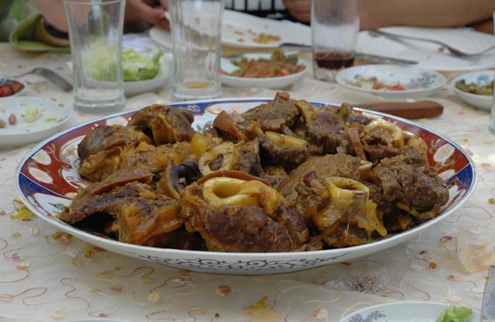 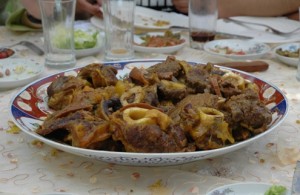 North African countries, which share the same sociocultural ties and the same historical and religious background, use almost the same ingredients in their cuisine with slight regional flavor differences. But it is clear that cinnamon and cumin are among the most popular spices used in this region. In most of their cooking, families use ginger, bay leaf, fennel, thyme, turmeric and red pepper.
These countries boost several similar dishes. Sometimes, we may find almost the same dish with different names and different dishes having the same name. For example, the “Moroccan Tanjia” and the “Tunisian Koucha” are both essentially the same dish: a meat stew prepared in an urn and cooked overnight in a public oven, sometimes with a slight change in ingredients and cooking style.
However, anyone may notice and taste the difference between the sophisticated, full-bodied flavors of Moroccan dishes, the hot-fiery dishes of Tunisian cuisine, and the humbler, simpler cuisines of Egypt and Algeria.
By blending the sweet-hot flavor of cinnamon with traditional ingredients, the North African cuisine offer new sensations and dishes that are more than just a feast for the eyes. Couscous is probably the most famous dish in Northern Africa. It has been called the national dish of Morocco, Algeria and Tunisia. An average family eats it approximately twice a week. People in the region often finish a meal with a charming presentation of mint tea embellished with a few floating pine nuts.
Despite the diversity of the North African cuisine, which shares some similarities with Mediterranean and European cuisines, the cooking of each country in this region stands out and has its own personality displayed in its popular dishes.