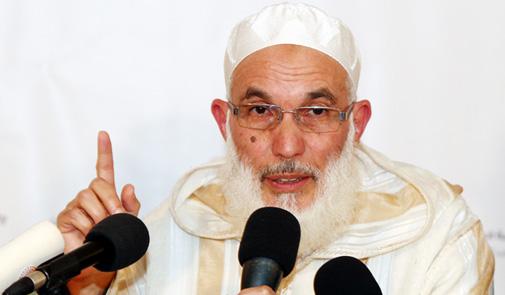 Will Mohammed Abbadi Succeed in Preserving the Unity of Al Adl wal Ihssane in this Crossroad?

Mohamed Abbadi has been elected earlier this week secretary general of Al Adl wa al Ihssane after the demise of the founder and spiritual leader of the Moroccan outlawed Islamist association, Abdessalam Yassine.

Mohammed Abbadi, Yassine’s closest friend who was sometimes called his “Black Box”, will lead the association for a five year term, not as the “Mourchid”, the spiritual guide, title bestowed on the late Yassine, but only as Secretary General. According to members of the association, the title “Mourchid” was created for “Imam Yassin” and no one will ever be his successor as such.
Abbadi’s election took place during an extraordinary session of the Consultative Council, the association’s supreme body, held December 21 through 23. The session also appointed the association former spokesman, Fathallah Arsalan, as Deputy Secretary-General and named Abdelkrim Alami head of the Consultative Council.
Although Abbadi has repeatedly said before his election that he was just a simple man and that he has no capacity to lead the association, some analysts see in the election of Abbadi and Arsalan a distribution of roles between the two main scholarly forces vying for leadership within the association, the guidance board made up of theologians and preachers, represented by Abbadi, and the political branch, headed for years by Arsalan. The election of the two men evidences the will of Yassine’s followers to merge the two wings in a single body, and spare the association a scission. To this end, the association has reportedly decided to adopt an organic law regulating the election process of the leader and heads of other bodies, hoping that this judicial framework will preserve its unity.
However, whatever the decisions and efforts, analysts believe that after the demise of the spiritual leader, the association will no longer be the same. Some figures who had in a near past influential stature have not even attended the press conference held by the association to announce the name of its new leader. These include Abdessalam Yassine’s own daughter, Nadia who resigned from her position as president of the women’s section only few months before her father’s death, and her husband who is member of the General Secretariat of the political branch, Abdellah Chibani, as well as another Yassine’s in-law, Mounir Regragui.
Abbadi, one of the founding members of the association and member of the Consultative Council, was born in El Hoceima (northern Morocco) in 1949. He got his BA in religious studies in 1982 and was part of the Oujda University faculty as professor of religious studies.
Will Mohamed Abbadi, who is described as a friendly and jovial man, have the necessary strength and charisma to preserve the unity of the association despite the ambitions of the ones and the others? Will he be able to heal the association’s relationship with authorities? Will the new changes introduced on the patterns of the association’s organization and culture give room to different ideas, opinions to be expressed? Will these changes lead to interaction between the old and new generations? Will all this prompt the association to reconsider its stands regarding participation in the country’s political life in the frame of an authorized political party? Commentators argue that answering all these questions will take some time but what is sure is that Al Adl Wa Al Ihssane is at a crossroad.