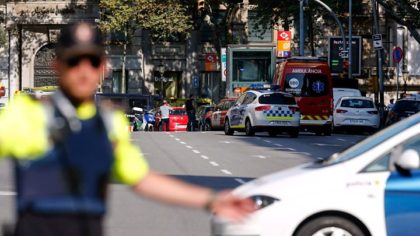 King Mohammed VI of Morocco condemned in the strongest terms the terrorist attacks that hit Barcelona and expressed his heartfelt condolences and solidarity to King Felipe VI and Queen Letizia of Spain.

The King said, in a message, that he was deeply saddened to learn about the deadly terrorist attack in Las Ramblas Promenade where a van plowed into pedestrians.

The Monarch expressed his firm condemnation of this cowardly attack that goes against human values and religious precepts and voiced Morocco’s full solidarity with sisterly Spain and its full commitment to international counter-terrorism efforts.

The attack in Spain’s second largest city marked the sixth time in just over a year that a vehicle has been used by an Islamist terrorist to cause mass casualties in a European nation. Similar major incidents have occurred in Germany, France, Britain and Sweden.

Five men suspected of attempting to carry out a related attack were shot by police early Friday morning in the nearby town of Cambrils. The attackers, who were wearing explosives, were intercepted after driving a car into a crowd of people, killing one and injuring six others. Catalan officials have since suggested that the explosives were fake.

One person was also killed in an explosion in a property in a separate town 100 miles southwest of Barcelona Wednesday night. Police sources say the residence was being used for preparing explosive devices.