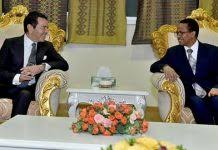 Prince Moulay Rachid, the brother of King Mohammed VI of Morocco, takes part in the 29th Summit of the African Union (AU), which opened this July 3 in Addis Ababa, Ethiopia, under the theme: “Harnessing the Demographic Dividend through Investments in the Youth”.

The participation of Morocco in this African summit is of great importance to the North African Kingdom as it comes after the country’s return to its institutional family in January 2017 after 33 years of absence.

The reintegration of Morocco in AU is regarded as a victory for Moroccan diplomacy and recognition for the tireless efforts made by King Mohammed VI who has placed Africa at the top of his country’s priorities.

By readmitting one of the founding members of the continental organization, Africa gained more leverage on the international scene as it was highlighted during the opening ceremony of the 29th AU summit marked by speeches made by Alpha Conde, President of Guinea and AU Chairman, and Chadian Moussa Faki Mahamat, Chairperson of the Commission of the African Union.

The two-day summit will be deliberating a set of key issues including AU financing and institutional reform, and terrorism, one of the major challenges of the moment for the African Union.

Another highlight of the summit is the fight for peace and security in the Sahel, South Sudan, Somalia… “We must silence the weapons by 2020,” said the Chairperson of the AU Commission, Moussa Faki Mahamat.

Debates will also focus on youth-oriented investments, the main topic of the summit.