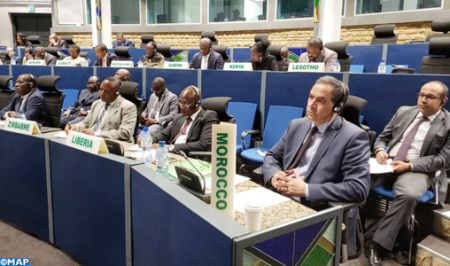 Morocco Reiterates Support for a Democratic, Inclusive and Unified Libya 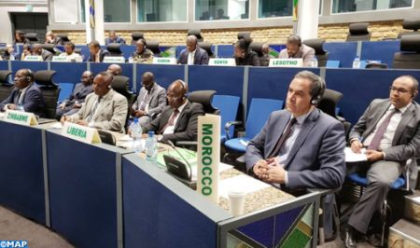 Morocco reiterated, on Wednesday in Addis Ababa, its support for the Libyan people’s aspirations to build a democratic, inclusive, and united State and to preserve their country’s national sovereignty and territorial integrity.

The pledge was renewed by Morocco’s representative to the African Union (AU), ambassador Mohammed Arrouchi, in an address at a meeting of the AU Peace and Security Council that was discussing the situation in Libya.

The Moroccan diplomat reaffirmed the Kingdom’s constant readiness to support the brotherly Libyan people in the delicate transition their country is going through and to help them fulfill their aspirations to build a democratic and united State.

Mohammed Arrouchi who highlighted Morocco’s efforts to reach a political solution to the Libyan crisis, stressed that the Skhirate agreement, signed by the parties to the conflict in 2015, can be adjusted but remains a fundamental reference for the settlement of this crisis, through a political solution guaranteeing Libya’s stability and security and fulfilling the aspirations of the Libyan people.

The Moroccan diplomat stressed the need to put an end to all military operations and to encourage all parties and political actors to resolve their differences through dialogue, insisting that a military option would not contribute to the stability of that country.

He also renewed Morocco’s support for the efforts of the UN envoy to Libya Ghassan Salame to reach a political settlement, and emphasized the importance of concerted efforts to eliminate the scourge of terrorism and combat illegal immigration.

“The Kingdom of Morocco reiterates its commitment to provide Libya with the necessary support to strengthen the capacity of the State and its institutions,” the diplomat said.

The AU Peace and Security Council meeting also addressed the issue of security sector reform in The Gambia.

In this regard, Arrouchi expressed Morocco’s solidarity with this country, within the framework of the Kingdom’s global vision based on the principle of solidarity with African countries.

He called on the African Union to provide all forms of financial, human and logistical support to ensure the success Gambia’s security sector reform process.