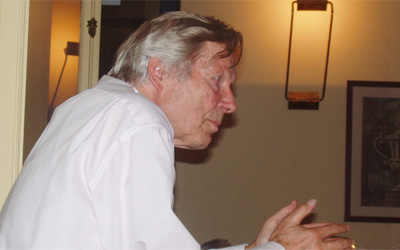 Eberhard Rhein: “I would rather be happy to see Algeria and Morocco normalize their trade relations.”

Eberhard Rhein is currently senior adviser at the European Policy Center in Brussels. He has devoted most of his life to European and global issues. During the 1980s-1990s, he served successively as chef de cabinet to the Commission vice-president in charge of external relations and director responsible for the Mediterranean and Arab world. Lately, he has focused more on global environmental issues. He has published on EU, Mediterranean and other subjects.

Q: For many years, you were directly involved – as director at the EU Commission responsible for the Mediterranean and Arab world – with the MENA region. You argue in one of your blog posts that “It has taken the “Arab Uprising” for the EU to re-discover its southern neighbors!” Can you please elaborate on this interesting statement?

A: Until two years ago North Africa was marked by a treacherous stability, which disguised profound socio-economic and political tensions. The EU could therefore afford to relegate its southern neighborhood to the back burner. Since 2011, it has no choice but to put North Africa very high on its diplomatic agenda.

Q: What should the EU do in the coming years to help the states in North Africa consolidate their transition towards democracy, the respect of basic freedoms, the rule of law and market economy?

A: The EU should focus its energy on those countries that are seriously committed to good governance and democracy. It should abstain from intervening in internal power struggles, which are a normal and even welcome part of the new political dynamics in the region. It should also abstain from traditional project financing and rather support medium and long term reforms, e. g. of the labor market or the educational sector.

Q: For more than 30 years, while focusing its attention largely on economic cooperation and trade with its southern neighbors, the Union has essentially failed to create a comprehensive Euro-MED free-trade area. In the era when FTAs sprout from North to South America to the Asia-Pacific, how could the EU use its influence to encourage the North African states to engage more each other on the economic front and move towards a comprehensive Free Trade Area incorporating both sides of the Mediterranean?

A: Despite its efforts, the EU has not been able to nudge its southern partners or at least some of them into free trade among themselves. I do not consider intra-MED free-trade as the first priority. I would rather be happy to see Algeria and Morocco normalize their trade relations.

Q: Could the Union for the Mediterranean (UfM), in your view, be used as a useful vehicle in the process of reforming the southern Mediterranean?

A: The UfM has never served a useful purpose. The parties should have the courage to bury it. 40 odd member states with very different interests are unlikely to ever achieve worthwhile results.

Q: Despite the recent reduction in restrictions on agricultural and fisheries exports from Morocco into the EU that may soon be followed by a similar measure with other North African countries, this process is unlikely to have a significant long-term positive effect on the agricultural employment in these countries. The continuing population growth is said to be the main culprit for the soaring unemployment, particularly in the agriculture sector. With the regional governments either unable or unwilling to tackle this rather sensitive issue, how could the EU help North Africa contain its demographic explosion?

A: Population growth has slowed down substantially in North Africa during the past 30 years. It is no longer the top priority for policy makers. The high unemployment is due to the demographic bulge of people between 20 and 45 years and the weak absorption capacity of services and industry. The recent political turmoil has not been helpful. The first priority for the region is therefore to offer trustworthy investment and employment conditions.

Q: With the EU aiming to increasingly meet its energy needs from renewable sources – 30 per cent by 2020 and almost 100 per cent by 2050 – a great portion of this renewable power will have to come particularly from large-scale photovoltaic (PV) installations in sunny regions of the North Africa. Since the Maghreb countries are likely to become Europe’s major supplier of solar energy by 2050, do you personally think that the EU has done enough to investigate opportunities and engage these countries to foster future solar-energy cooperation?

A: North Africa receives enough solar radiation to supply Europe with electricity. But high costs for transmission and political instability prevent a rapid exploitation of these resources. I do not expect this situation to change before 2020, however much I may personally regret it. But there is no point to disseminate false expectations.

Q: The EU has recently promised to present Turkey a road map that would end with visa-free travel to Europe. What do you think are the prospects for a similar ‘roadmap’ for the Maghreb countries – not necessarily with a visa-free regime as the main objective but aiming to make more flexible the process of granting EU visas for business people, researchers, scientists as well as tourists?

A: The way towards visa-free travel for Turks will be very long. For some North African countries, it looms even further away. The EU will be extremely cautious considering the risk of many tourists ending up in the black labor market.

Q: Recently, Israel has suffered one of its worst diplomatic defeats when, despite intensive diplomatic pressure by Israel and the U.S., more than two thirds of the 193 UN member states voted in favor of upgrading the status of the Palestinian Authority in the General Assembly from “observer” to “non-member observer state” status. With only one EU member state voting against the Palestinian resolution and the EU’s role in the Middle Eastern peace process basically confined to functioning as a major financier of the Palestinian Authority and refugees, what economic and diplomatic tools are there available to Brussels to persuade the adversaries to quickly re-start the currently stalled negotiation process?

A: Restarting the negotiation process has never been harder: Israel is about to make it impossible by proceeding with the projected E1 Settlement east of Jerusalem; and the Palestinians have to unify and jointly recognize the State of Israel and its right to exist in the region. The EU should therefore establish contacts with both sides and the USA immediately after the installation of the new government and the inauguration of the US Administration in January 2013. It has no chance to go it alone. Its political, financial and trade leverage are far too small.